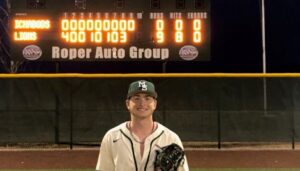 Missouri Southern junior righty Will Bausinger became the first pitcher in Missouri Southern school history to throw a perfect game and the Lions swept the opening day of the 2019 MIAA/GLVC Challenge on Warren Turner Field. The Lions (5-3) took out Rockhurst (0-2) in the opener, 13-3 in eight innings, while Bausinger helped the Lions to blank Washburn (4-4) in the nightcap, 9-0.

Bausinger, who attended Marquette High School in St. Louis Country,  became the ninth Lion to throw a no-hitter in program history and the first since Sean Goostree in 2015 when he no-hit Pittsburg State. He threw 122 pitches, 89 of which were strikes, and struck out 17 batters, which is the second-most in a single-game at MSSU.