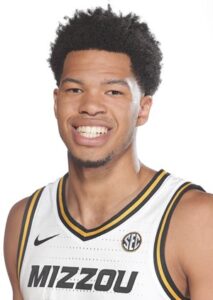 Mizzou basketball’s Ronnie Suggs who sat out a year after transferring from Bradley played a key role in Tuesday’s win over Arkansas.  In his six minutes, he scored five points including a three-pointer that helped extend the Tigers lead and then he was involved in the defensive stop on the final play of the game and he did it all on his 23rd birthday.  Now the Washington Missouri native has been placed on scholarship by Cuonzo Martin.

In two years at Bradley, Suggs started 20 games and appeared in 35 before sitting out last season due to transfer rules.  Suggs is averaging eight minutes a game this season and 1.8 ppg.

Led Washington (Mo.) High School to consecutive district championships as a junior (2012-13) and senior (2013-14). Averaged 16.8 points and 4.1 rebounds per game to earn all-state selection in Class 5 by the Missouri Basketball Coaches Association as a junior in 2012-13. Repeated as an all-state selection as a senior in 2013-14 and was one of 10 finalists for Missouri Player of the Year after averaging 23.0 points and 8.0 rebounds per game.