You are here: Home / Business / Lincoln Day is a Missouri state holiday on Tuesday

Tuesday is Lincoln Day, which is a Missouri state and county holiday. 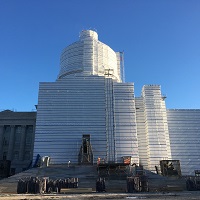 Lincoln Day is named for President Abraham Lincoln, the nation’s 16th president. President Lincoln led the nation during the Civil War before being assassinated in 1865.

Most Missouri state and county offices, including county courthouses, will be closed Tuesday, with the exception of emergency services such as the Missouri State Highway Patrol and county sheriff’s departments. Corrections officers will be working inside the state’s prisons.

While Tuesday is a state holiday, the Missouri Legislature will be in session and numerous legislative hearings are scheduled.

Monday will be another state and county holiday, with the observance of Washington’s birthday.