You are here: Home / Agriculture / Parson is concerned about redistricting component of “Clean Missouri” (AUDIO)

Missouri’s governor is expressing concerns with the “Clean Missouri” measure approved by voters in November, specifically the provision to require a state demographer to draw state legislative maps. 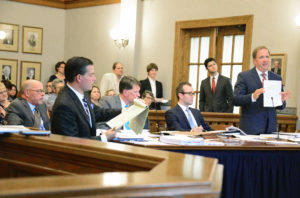 “But I think we all know in this room that the bottom line to that (Amendment One) was the redistricting portion of it is what we was trying to change,” Parson says. “Do I have concerns about that, yes I do.”

62 percent of Missouri voters approved Amendment One, which passed by more than 500,000 votes in November. Parson says any changes should have to go back to voters.

Amendment One also bans gifts worth more than $5 from lobbyists to lawmakers and lowers the campaign contribution limits for state legislative candidates.

“I don’t think it (Clean Missouri) had anything to do with the money side of it because I don’t think there was hardly any changes to that myself, personally, I don’t,” says Parson. “But I think that was part of the sales pitch.”

Johnson spoke to Missourinet outside the Cole County Courthouse on August 31, after a 90-minute court hearing in Jefferson City.

“I think they (districts) should be compact, contiguous, and competitive,” Johnson said that afternoon. “No longer do we want to see a group of voters on one side, three blocks separating for a mile or so and pick up another group of voters. No, we want them squares and rectangles and that kind of thing.”

Amendment One opponents included the Missouri Farm Bureau, which said Amendment One “would mandate extensive gerrymandering” in an effort to balance each district with an equal number of Democratic and Republican voters.

The Missouri Chamber of Commerce also opposed the measure. Chamber President Dan Mehan called it “a solution searching for a problem.”

Amendment One also requires state lawmakers to wait two years before becoming lobbyists. It had previously been one year.

Click here to listen to Missouri Governor Mike Parson’s comments about “Clean Missouri”. The comments came on January 31, 2019, during the Missouri Press Association and AP day in Jefferson City: