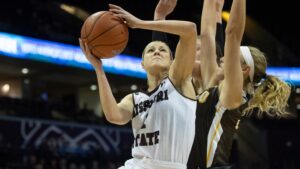 The Lady Bears (12-7, 8-0 Missouri Valley Conference) extended their win streak to 11 games overall and 15 in MVC play, ending Drake’s record 47-game conference streak and dropping the Bulldogs to 15-5 overall and 7-1 in Valley games.

Senior Danielle Gitzen collected her third career double-double with 21 points and 10 rebounds, Brice Calip scored 12 of her 16 points in the fourth quarter, Dariauna Lewis scored a career-high 15 points on 6-of-7 shooting, and Alexa Willard added 13.

After yielding a 30-point outburst to the Bulldogs in the third quarter on the way to a 63-53 deficit after 30 minutes, the Lady Bears roared out of the gates in the final period, with Calip scoring the first six of a 9-0 run that took just 91 seconds.

Gitzen scored with 7:30 left for a 66-65 lead that MSU would never relinquish, as a Lewis free throw for 71-67 capped an 18-4 run to the halfway mark of the fourth. Two Gitzen free throws with 2:10 left made it 77-70, and it was a 77-74 advantage with 52 seconds left when the Bulldogs began fouling in a comeback attempt. The Lady Bears hit eight free throws in the final 45 seconds and 15 in the final quarter.

MSU got off to a 1-for-8 shooting start but never trailed by more than five points in the first half, pulling even at 26-26 taking their first lead at 30-29 on Calip’s jumper. After Lewis hit a trey with 52 seconds left for a 33-31 advantage, Drake made seven of its next eight field goal attempts to build a double-digit lead at 48-38 with 6:08 on the third quarter clock.

Missouri State closed within a possession at 50-47 after Sydney Manning’s bucket, but the Bulldogs were sent to the foul line 13 times in the third quarter on the way to the 63-53 lead after 30 minutes.

The Lady Bears owned a 52-41 rebounding edge, including 22 offensive boards to help MSU attempt 10 more shots than the Bulldogs. Missouri State shot 39 percent compared to .446 for DU, and grabbed 12 steals.