Some upset Kansas City Chiefs football fans will play a role in eating a potential record 1.3 billion chicken wings during Super Bowl parties this weekend. Tom Super of the National Chicken Council tells Missourinet affiliate KDKD in Clinton wings and football have gone together for many years. 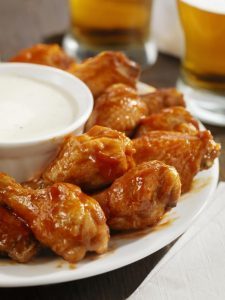 “Back in the 60s and 70s, folks cooked the whole bird at home,” Super says. “In the 80s, you as consumers, started preferring boneless, skinless breast meat. Wings really became an inexpensive biproduct for chicken producers. Restaurants and bars realized that they could charge low prices for this relatively inexpensive protein. Due to the spicy, salty nature of the sauce and the wings, beer sales would go through the roof.”

Super says the wings would not be possible without the hard work of about 25,000 poultry producers, including those in Missouri. He says about nine billion chickens are raised each year for their meat.

Super says chicken wings remain the perfect party food this weekend, even if you refuse to watch the game.