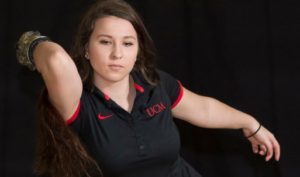 Katey Furze had a big weekend for the Jens. She joined the exclusive ranks of the 300 club Saturday morning as she rolled a perfect game in the second traditional match of the day. She was named the Tournament MVP and had the highest average at 237.17.

The Jennies third-place finish is their highest this season. They finished in third place overall by going 9-4 in match play and then earned the No. 3 seed in the bracket, which is where they finished.

Nebraska ended up winning the bracket over Lincoln Memorial in seven games. They also totaled the most pins, 14,381 and had the best record at 11-2.