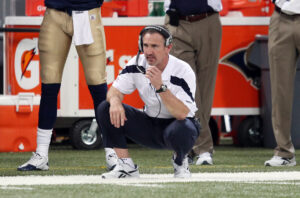 The Kansas City Chiefs have named Steve Spagnuolo their new defensive coordinator.  He coached defensive backs and linebackers under Andy Reid from 1999 to 2006.  The Chiefs finished 31st in yards allowed this season under Bob Sutton.  In 2017, when Spagnuolo coached the Giants defense they finished 31st in total yards.  Spagnuolo was 10-38 as the Rams head coach in St. Louis from ’09 to ’11.

If the Chiefs are going to get to the Super Bowl, the defense has to improve and build off a pass rush that led the NFL with 52 sacks behind Justin Houston, Chris Jones and soon to be free-agent Dee Ford.  What the Chiefs lack is a secondary.  The team traded away trouble maker and former Pro Bowler Marcus Peters and still have huge question marks surrounding the health of Eric Berry.

Now that the offense is built and in place and we certainly know what to expect from Patrick Mahomes, Chiefs GM Brett Veach needs to rebuild that defense quickly.  His blueprint injected offense around an unproven Mahomes heading into 2018 and he used his first four draft picks on defense.  With the 29th pick in the first round this year and two of the final four picks in the second round, the chances of finding a year-one high impact defensive back through the draft is questionable at best.

With Spagnuolo’s input and trust from Andy Reid, Veach and Kansas City’s brass are on the clock.