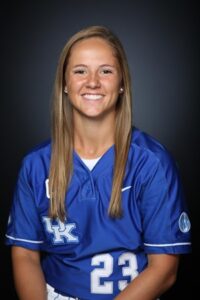 Katie Reed, a St. Louis native and now middle infielder on the Kentucky softball team was named to the preseason All-SEC team. Reed had nine multi-RBI games and 15 multi-hit games her junior season where she hit .352 with six homers and 32 runs driven in.

In addition to being a star softball player at Oakville High School, Reed also played basketball, track and ice hockey.

Among her career awards and honors at Kentucky: