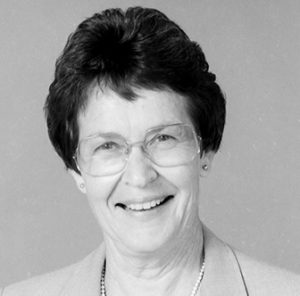 Dr. Mary Jo Wynn, one of the most progressive and successful women’s athletics programs in the country at Missouri State and a national pioneer for the cause of women’s sports died Tuesday. She was 87.

A native of Hartville, Mo., she was named the first director of women’s athletics at MSU in 1975, punctuating a continuous and nationally-acclaimed career in education, coaching and administration that stretched over four decades on the Springfield campus. When the men’s and women’s athletics departments at Missouri State merged in 1992, she was named senior associate director of athletics and senior woman administrator, titles she held until her retirement in 1998.

Prior to being named director of women’s athletics, she organized women’s athletics competitions within the physical education department and leading to the formation of intercollegiate volleyball and tennis teams — programs she began coaching in 1958. She also coached swimming and track during her tenure, which eventually saw the MSU women’s intercollegiate programs grow to 11 sports.

Wynn played a major role in the formation of the Association for Intercollegiate Athletics for Women (AIAW), of which MSU was a charter member. She was an executive board member for the AIAW, starting in 1977, and was later instrumental in the formation of the Gateway Collegiate Athletic Conference in 1982. When Missouri State’s men’s and women’s teams joined the Missouri Valley Conference on July 1, 1992, Wynn was again in the forefront, earning National Association of College Women’s Athletic Administrators (NACWAA) District 7 Administrator of the Year distinction that same year.

During her administrative tenure, Missouri State experienced success in every sport, making seven NCAA Division I appearances in basketball, four in softball and three in volleyball. With her support, leadership and legacy, MSU won an AIAW national title in softball in 1974, an AIAW national title in field hockey in 1979, and appeared in NCAA Basketball Women’s Final Fours in 1992 and 2001.

In 1985, Wynn organized a group for women’s athletics supporters, ultimately helping MSU lead the nation in women’s basketball attendance in 1992-93 and rank in the top 10 each of her last seven years. She also organized the MSU Women’s Athletics Hall of Fame in 1981 in which she was enshrined in 1999 — the first year of joint men’s and women’s hall inductions.

The Women’s Basketball Coaches Association (WBCA) named her Administrator of the Year in 1996, just prior to earning a Lifetime Achievement Award from the National Association of Girl’s and Women’s Athletic Administrators in 1999. She also earned the first-ever Bee Payne Stewart Award presented by the Women’s Intersport Network (WIN) in 2007.

Wynn was also a recipient of the Missouri State University Outstanding Alumni Award in 1995 and was inducted into the Springfield Area Sports Hall of Fame in 1996. In 1998, Missouri State University renamed its top academic award for female student-athletes the Dr. Mary Jo Wynn Senior Female Scholar-Athlete Award in her honor. She also received the NACWAA Lifetime Achievement Award in 1999 — an honor bestowed to an administrator who dedicated their career to advancing women in sport.

Wynn graduated from Missouri State in 1953 and was a member of the drum corps, Baptist Student Union and Orchesis dance organization as a student. She went on to earn her masters from Northern Colorado in 1956 and her doctorate from the University of Oregon in 1971.