You are here: Home / News / Missouri first responders gear up for arctic blast 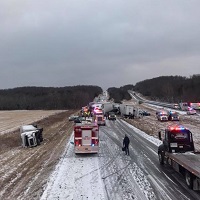 Missouri firefighters, including those in Marthasville, have additional crews helping out during this weekend’s expected winter storm. Marthasville Fire Chief Jeff Backhaus overseas three stations near eastern Missouri’s Warrenton that are made up of volunteer firefighters. He tells Missourinet crews are prepared for the worst but hope for the best.

“We haven’t changed anything from last weekend. So, everything is pretty much prepared,” he says. “When we have impending weather coming in, we normally know pretty much who’s going to be around. They sort of tell us ‘Hey we’re headed out of town.’”

Backhaus says he has about 20 volunteer firefighters ready for duty this weekend. He says his firefighters will probably spend most of their time helping with traffic control and vehicles stuck in the snow.