In a state Donald Trump won by 19 points in 2016, Republican Congressional members who represent the vast rural areas and exurbs that determine elections have backed the President during the current partial government shutdown. Meanwhile, Show-Me State Democrats in Washington are standing with their party in refusing to allow border wall funding the president is demanding to end the deadlock.

President Trump stepped up his efforts to sway public sentiment Monday by announcing he will make a national TV appearance Tuesday night to discuss what he calls the crisis at the border. Polling hasn’t shown strong public backing for the border wall.  Democrats have asked for equal time to respond to the President’s message on TV. Trump also announced he’d be visiting the southern border on Thursday.

On December 19th, the Senate passed a clean short-term funding bill, called a continuing resolution (CR), that did not include border wall funding but would keep the government open until February 8. The President supported the bill at the time but changed his mind the next day. After listening to attacks from conservative TV pundits and the House Freedom Caucus, he announced that he will not sign a bill without wall funding. House Republicans then passed a CR that includes $5.7 billion in wall funds on December 20th.

No progress was made on an agreement to fund the government with or without the border wall funding in Congress over the next few days. Republican Majority Mitch McConnell of Kentucky adjourned the Senate for the Christmas holiday and neither chamber addressed the shutdown before the new year.

Congressional leaders from both parties met with Trump at the White House for the first time in three weeks on January 3rd, a day after Trump tweeted a message asking incoming Democratic House Speaker Nancy Pelosi to make a deal. Democratic leaders restated their position that no money would be allocated for the wall.

On January 3rd, Democrats took control of the House and elected Pelosi as Speaker. The chamber then passed two bills which would fund the government without funding for the border wall. The bills earned a handful of GOP votes. Although those bills were nearly identical to the measures passed by the Senate before the holiday break on a voice vote, Republican Senate leaders reject the idea of taking up the bills.

Since then, McConnell has repeatedly said he won’t bring the funding bills to the Senate floor because President Donald Trump wouldn’t sign them. McConnell has been criticized by Democrats for ceding legislative authority to President Trump and not playing a role in trying to break the deadlock. Three Republican Senators facing tough reelections in 2020 have called for the government to be funded and for the shutdown to end without border wall funding. They are Cory Gardner of Colorado, Susan Collins of Maine and Thom Tillis of North Carolina. 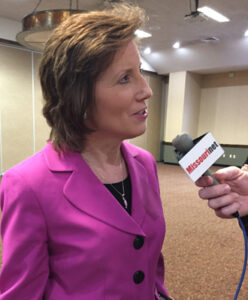 Here in Missouri, Republican Representative Vicky Hartzler sent out a detailed statement Saturday titled “The Urgent Need to Secure Our Borders”. She quoted numbers over a 10-month period in which three-tons of cocaine, 530 pounds of heroin, 220-tons of marijuana, 5-tons of methamphetamine, 330 pounds of fentanyl had been seized by the U.S. Border Patrol.

In her statement, she mentioned the recent death of an immigrant that’s been played up on conservative media sources. California Police Officer Ronil Singh, a native of Fiji, was killed during a traffic stop in which the suspect was an undocumented immigrant. Hartzler said she hoped Democrats in Congress “support securing our border.”

Monday, Representative Hartzler confirmed that she would not have supported the Republican-controlled Senate bill that passed on a unanimous voice vote in early December without border wall funding. “That’s correct,” said Hartzler. “It needed to have the funding for the wall, border security in it, and I was glad when he (President Trump) said ‘You know, we need to do this.'”

Hartzler said there was irony in Democratic opposition to the border wall now, noting Democrats supported the expansion of fencing in 2013.

“The only reason they have changed their minds is because now there’s a different president in the White House,” Hartzler said. “And I think the American people see that hypocrisy.”

The 2013 measure that Senate Democrats supported included 700 miles of fencing, but also included a process to let 11 million undocumented immigrants gain a path to citizenship. 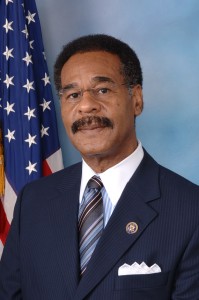 Western Missouri Democratic Congressman Emanuel Cleaver takes issue with Hartzler’s claim that immigrants trying to cross the border illegally are bringing the mass quantities of drugs with them. He told Missouirnet that the Drug Enforcement Agency (DEA) and the Justice Department had once again confirmed that most of the contraband coming into the country was through vehicular traffic at ports of entry. According to figures from the DEA, the majority of hard narcotics seized by Customs and Border Protection come through ports of entry either in packages, cargo or with people who attempt to enter the U.S. legally.

Congressman Cleaver also claims there’s no crisis at the border with massive numbers of immigrants trying to illegally enter the country.

“We’re at an all-time low in terms of people coming across the southern border trying to get into the United States, and it’s been going down now for about three or four years,” said Cleaver.

According to the U.S Customs and Border Protection, fewer than 400,000 undocumented people were apprehended after entering the country illegally in 2018, compared to 1.6 million in 2000. Republicans who back Trump’s border wall demand point to a recent surge in people coming from Central America.

On Monday, Cleaver told Missourinet that his Republican colleagues in Congress from the Show-Me State continue to back up the President on the border wall because they would be politically damaged by challenging him.

“My colleagues from Missouri are good and decent people who realize that President Trump has a stronghold on the Missouri Republican voters,” said Cleaver. “If they should challenge the President and the facts that contradict what the President has said, they are very likely going to lose some support.”

The Kansas City-based Democrat noted that Republican Congressman William Hurd, who represents a large swath of Texas along the Mexican border strongly opposes the wall and is critical of arguments made by his fellow party members.

“He has been very, very clear on all the talk shows that people are making up things and scaring the American public because they realize that most Americans are not going to take the time to go out and find out exactly what the facts are,” said Cleaver.

Over the weekend, President Trump said he might declare a state of emergency and build the wall without Congressional funding. For her part, Representative Hartzler told Missourinet that the President could use the Army Corps of Engineers to undertake the action, but advised against it.

“They do have equipment available and tools and manpower that could potentially be used for that, but my hope is that we would go ahead and fund the border wall through the regular method, through (the) Homeland Security department,” Hartzler said.