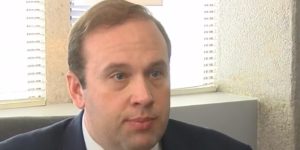 The Congressman answered questions from a standing room only crowd gathered in the limited space at Dottie’s Family Restaurant. He then fielded questions from audience members concerned about the partial shutdown.

Forum participant Tammy Harty told KFVS-TV that the two parties need to come together in Washington and solve the problem.

Another forum participant, Mitch Davis, blamed Congress for the deadlock keeping the shutdown in place.

“The fact that we’re now basically having politicians use procedural tricks to stop the democratic process from working, I think is unfortunate,” said Davis.

KFVS reports that Congressman Smith characterized the deadlock as an issue of open borders against open government and said the biggest enemies to the United States are Republicans and Democrats.

In an interview earlier this week with Missourinet, Smith clearly blamed Democrats, specifically Minority Senate Leader Chuck Schumer, for refusing to compromise with President Trump over money for a border wall the President is demanding.

“In January when Schumer shut down the government over immigration, he offered $25 billion for border security in exchange for DACA (Deferred Action for Childhood Arrivals),” said Smith. “Now he’s not even willing to do $2 billion.”

Smith also told Missourinet that he thought President Trump will find a solution to the deadlock.

“The President has always been clear that he’s a negotiator,” said Smith.  “The House passed almost $6 billion.  The Senate has passed zero and they’ve offered $1.3 billion.  I’m sure the President would support somewhere in between.”

According to Representative Smith, in the past, federal employees who work during a government shutdown did get paid eventually.

A union representative in St. Louis for the American Federation of Government Employees told Missourinet Wednesday that he’s not sure if furloughed workers will receive back pay for unpaid leave they’re being forced to take.

Some 800,000 workers in nine federal agencies are impacted by the partial shutdown.  The employees are among the estimated 380,000 on unpaid leave.  Another 420,000 who have determined to be essential personnel are required to work without being paid.

Congressman Smith was not in Washington Thursday when the House and Senate adjourned after brief formality sessions and made plans to reassemble Monday. The move means any action to end the partial government shutdown will take place after New Year’s Day as negotiators remain in a gridlock.