A movie now appearing on Showtime was shot in southwest Missouri’s Springfield and some cast members are local residents. 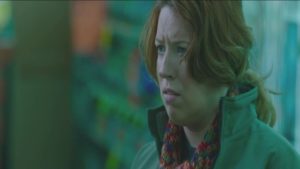 Image from the movie Above Ground (Image courtesy of KOLR-TV)

Wes Nichols plays a truck driver in the film “Above Ground”. He said the experience was an eye-opener for someone who’d never been part of a major movie production. “When you’re on the inside looking out, it’s a totally different ballgame,” said Nichols.

Andie Bottrell is a professional actress who lives in Springfield. She’s happy the film has found a platform to be viewed by a mass audience. “You never know if it’s going to see the light of day or not, or how it’s going to be distributed,” said Bottrell.

In October, the St. Louis Post-Dispatch expressed relief that a movie that takes place in Missouri was actually shot in Missouri. The newspaper noted that “Three Billboards Outside Ebbing, Missouri” was filmed in North Carolina and the hit television show “Ozark” is shot in Georgia. Missouri doesn’t offer tax breaks to the film industry like numerous other states.

Bottrell said she enjoyed her role as a main character’s best friend in the movie. “Brenda was a lot of fun to play,” Bottrell said.

Nichols is not an actor, but a small business owner in Springfield who landed a small role. He was amazed at the elaborate effort that goes into filmmaking and the length of time it takes to release the final product. “30, 40, 50 people behind the scenes,” Nichols said. “If you’re ever in a movie, don’t tell anybody until maybe three or four years later.”

As an actress, Bottrell says this is her biggest part yet. After spending six years in Los Angeles, she moved back home. “I felt like that was sort of going to have to be a pause for my career and everything that I had been working on would be put on hold,” said Bottrell. “I never in a million years thought that coming back to Springfield, Missouri, I would end up with a part in a movie that’s on Showtime. But it goes to show that you never know what path life is going to take you on.”

Bottrell plans to continue acting, while Nichols says he’s proud of his work and will probably dabble in acting again. “I think you’ll like it. For a 53-year-old man, I didn’t do too bad,” Nichols said. “You probably have not seen the last of me yet.”

“Above Ground” has been called a neo-noir film, meaning it’s a contemporary rendition of the style common Hollywood crime dramas in the 1940s and 1950s. It’s showing into the new year at various times on Showtime.