You are here: Home / News / Southeast Missouri has most seismic activity east of Rocky Mountains

Southeast Missouri’s Bootheel region is home to the most active seismic area in the country east of the Rocky Mountains according to the state Department of Natural Resources. 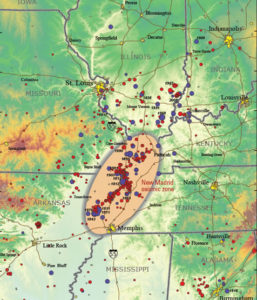 Emergency management agency officials say on average more than 200 earthquakes shake the New Madrid Seismic Zone each year. Many of those we don’t feel, but they still can predict what future seismic events.

“There are gonna be big ones again these days. Whether that’ll be tomorrow or a hundred years from now, unfortunately, it’s impossible to know that,” said Jeff Briggs, Missouri State Emergency Management Agency’s Earthquake Program Manager.

He said the New Madrid Seismic Zone is still very active.  “We do know the risk is substantial enough that we do need to prepare for it,” said Briggs.

The Cape Girardeau County Emergency Management Agency’s Director, Mark Winkler, recommends being prepared. He suggests creating an emergency plan for yourself, keep an emergency kit at work or home, have a reunification plan with loved ones and participate in earthquake drills.

“Disasters are cyclical. They can happen at any time. We tend to let our guard down whenever there isn’t a tornado or there isn’t an earthquake,” said Winkler.

He recommends learning from the past on what you need to do to be prepared.

“The main way people are gonna get injured in an earthquake is from falling debris. It’s much less likely that a whole house is gonna collapse, but that heavy things might fall on us,” said Briggs.

Both Winkler and Briggs advised making sure anything that could fall is secured, including bookcases, heavy light fixtures, and ceiling fans. Those little things could make a big difference.

Briggs also said unlike any other natural disaster, you won’t get a warning before an earthquake, and that makes them uniquely dangerous.

Three earthquakes of a magnitude 7.0 or greater occurred in the New Madrid Seismic Zone between December 1811 to February 1812.