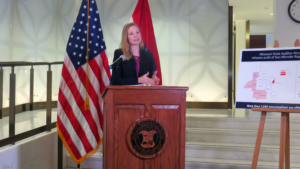 According to Galloway, between fiscal years 2013 and 2017, the number of reports made to the hotline jumped by an average of 4,500 annually. Over the same period, the audit found the average hotline wait time more than tripled from one minute, 18 seconds to four minutes, 28 seconds.

Galloway says her audit shows insufficient staffing to handle calls has also meant callers have to call back multiple times to make reports.

“The role of the Hotline Unit is absolutely critical in protecting Missouri’s children,” Galloway says. “The process of receiving and reviewing allegations of child abuse and neglect – and then taking quick, appropriate action on credible reports – must be as efficient and thorough as possible. While DSS continues to implement changes to improve this process, we found that a lack of resources is still hindering the work of the Hotline Unit.”

Galloway, a Democrat, says the Department of Social Services has made various efforts to improve wait times, including implementing an online reporting system for non-emergency reports in fiscal year 2017 and increasing the number of staff in fiscal year 2018. In addition, the Hotline Unit opened a field office in Springfield.

The audit also points out that the Hotline Unit has not developed and monitored formal and quantifiable performance goals or expected levels of performance.

A copy of the audit can be found here.