Paintings lining the hallways of the Missouri Capitol in Jefferson City look vibrant from a newly-completed repair project. Ohio-based nonprofit organization ICA Art Conservation led the restoration of about 55 murals dating back to the 1920s. Senior Paintings Conservator Andrea Chevalier tells Missourinet 76 murals were originally inspected for possible touch ups, but not all needed fixing. 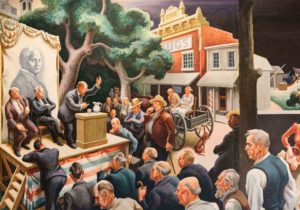 Dana Rademan Miller, the chairperson of the Capitol Commission, tells Missourinet the restoration project has been going on for a couple of years.

“We knew it had been some time since it has been assessed and we were concerned about the condition of some of the murals,” she says. “We just wanted to ensure that they were in good shape and we that knew there were actually some issues with a few of them that needed to be addressed.”

Rademan Miller says the Commission was prepared for the worst, but happy to find out the artwork was in decent shape.

“This group’s (ICA) approach was less is more, which is a nice philosophy,” she says. “The more you work on an original painting, the more that you clean it and touch it, you risk compromising the paint and the pigment.”

Rademan Miller says a fundraiser paid for the $20,000 cost to assess what work needed to be done and an another $150,000 in state bonding funds was used to fix the murals.

Chevalier says the murals worked on include the massive painting in the House Lounge by Missouri-born artist Thomas Hart Benton.

His controversial 1936 mural “A Social History of the State of Missouri” is like a moving picture with figures leaping off the walls. It captures the state’s rich social history with different scenes that intertwine with the people who built Missouri, slavery, mythology, a political gathering, Huckleberry Finn and Jesse James robbing a bank.

“They are probably the most important considering the artist’s reputation in sort of art history,” says Chevalier.

Benton, who grew up in southwest Missouri’s Neosho, spent two years creating the work of art. The Missouri Legislature commissioned Benton for the $16,000 job.