You are here: Home / News / Missouri’s Kennedy Holmes finishes 4th in ‘The Voice’

An incredible season has come to a close for the youngest contestant on NBC’s “The Voice”. 14-year-old Kennedy Holmes, who hails from the St. Louis suburb of Florissant, placed fourth in the competition that ended Tuesday night. Holmes was the only finalist who is not a country music performer. 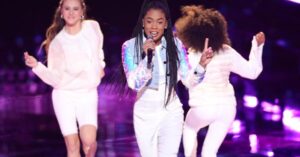 Many Missourians have been rooting for the rising star, who has dominated over and over this season in her performances with her enviable strong voice and dance moves. Holmes has showcased her skills by singing hits like Whitney Houston’s “The Greatest Love of All”, Pink’s “What About Us”, Meghan Trainor’s “Me Too”, “This is Me” from the musical “The Greatest Showman” and Beyonce’s “Halo”.

The Missouri singer has been coached this season by her idol – R&B singer Jennifer Hudson. During a duet Monday night between Holmes and Hudson, they floored the crowd by singing “Home” from the 1975 Broadway musical “The Wiz”.

The winner of the contest, Chevel Shepherd of New Mexico, walks away with a $100,000 grand prize and a record deal with Universal Music Group. Shepherd was coached by pop rock singer Kelly Clarkson.