The state legislature will be asked next year whether to bar Missouri businesses from requiring workers to pay mandatory union fees. The bill is being sponsored by Republican Senator-Elect Eric Burlison of Springfield, who has sponsored similar legislation while previously serving in the Missouri House. 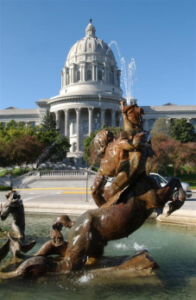 State Representative Holly Rehder, a Republican of southeast Missouri’s Sikeston, sponsored a Right-to-Work bill in the last session. It raced through the General Assembly and was signed into law by former Gov. Eric Greitens.

Rushing the legislation through allowed labor groups more time to gather enough signatures for a public vote. In August, voters overwhelmingly opposed a ballot measure that asked whether Missouri should be a Right-to-Work state. It lost by a landslide 67-to-32 percent margin.

Opponents of the measure had a major financial advantage in the primary election. Labor organizations from inside and outside Missouri poured money into the effort to prevent Missouri from becoming a Right-to-Work state. The lead group behind the opposition, We are Missouri, spent $15.3 million, according to its filings with the Missouri Ethics Commission.