You are here: Home / News / President Trump to make stop Friday at conference in Kansas City 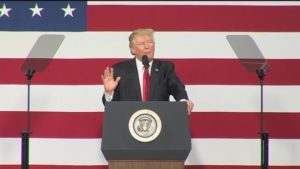 The two-and-a-half day closed event is being held at the Westin Kansas City at Crown Plaza Hotel starting Wednesday.

U.S. Attorney Tim Garrison told Missourinet in July that Missouri has three of the top 15 most violent cities in the nation in St. Louis, Kansas City, and Springfield.

President Trump will speak during the closing half day of the Kansas City event.  It’ll be the President’s eighth trip to Missouri since taking office.  He made numerous campaign stops in the Show-Me-State during the 2018 election cycle to drum up support for Republican U.S. Senator-Elect Josh Hawley, who defeated two-term incumbent Democrat Claire McCaskill in November’s contest.