There’ll be some focus on streamlining the process for businesses to expand or relocate in Missouri during the upcoming legislative session. 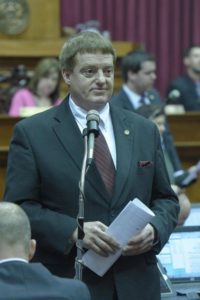 State Representative Tim Remole hopes to address the length of time it takes a company to obtain necessary permits during the 2019 General Assembly. The Excello Republican sponsored a measure last session that would require state agencies to more quickly approve or deny permit applications from businesses seeking to create at least 20 full-time jobs.

The bill didn’t cross the finish line but Remole is hopeful it can be amended into an omnibus piece of legislation centered on development this year. “Where we have a lot of great ideas (brought) into an economic development bill, workforce development,” said Remole.

She was appointed to her post in Jefferson City by former Republican Governor Eric Greiten, who championed the loosening of regulations during his 18-month tenure. While being introduced by Geitens in January 2017, Comer said her department worked with the Department of Economic Development to create jobs and attract businesses and investment to Indiana. Republican lawmakers in Missouri have had a contentious relationship with the Department of Natural Resources, blaming it for inhibiting job creation with onerous penalties.

Remole thinks the pieces are now in place to step up the process of approving business permits, especially with Governor Mike Parson’s emphasis on jobs. “With the Governor’s top priority being workforce development, and permitting being a big part of that, I think we’re seeing it move forward,” said Remole.

The bill Remole sponsored in the last session applied to businesses committed to creating 20 or more jobs.  It would’ve required state agencies to approve or deny permit applications from businesses within six months. Any application not addressed by the agency within the six-month window would automatically be deemed approved. The state could receive an extension of its decision-making time period but would have the burden to prove good cause if challenged by a business in court. Once approved for a permit application, no agency would be allowed challenge the growth or establishment of a business unless it was for a reason other than business expansion or development.

Remole is a senior state representative who will begin his final two-year term in office in January.