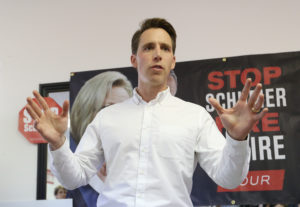 Hawley released a statement Wednesday announcing his intention. McCaskill, a two-term Democrat who was defeated by Hawley in November’s election, filed her bill in August after 17 people died in July when a duck boat sank during a heavy storm on Table Rock Lake in southwest Missouri.

Her measure followed through on major recommendations made by the National Transportation Safety Board (NTSB) in 2002 after a similar duck boat tragedy in Arkansas killed 13 people in 1999.

Hawley said details of the bill and additional information will be provided in the new Congress.

McCaskill’s legislation calls on the Coast Guard to formulate regulations requiring that Duck Boats have adequate buoyancy to stay afloat when they become flooded.

It further imposes interim requirements, which include either the removal of canopy roofs or the installation of Coast Guard-approved canopies that don’t restrict horizontal or vertical escape by passengers if the Duck Boat sinks.  The NTSB determined existing canopies fatally entrapped passengers inside the vehicle when the boat in Arkansas went down.

Hawley said in his Wednesday statement that federal agencies and lawmakers need to ensure that future duck boat mishaps are prevented. “The investigations into the tragedy on Table Rock Lake must continue,” Hawley said. “But as they do, Congress must act to ensure tragedies like this one do not happen again—in our state, or anywhere else.”

Not all Missouri lawmakers have supported duck boat legislation. Republican State Representative Scott Fitzpatrick of southwest Missouri’s Shell Knob owns MariCorp, a dock-building company. He was on the barge when the sunken boat in Table Rock lake was brought to the surface in late July. At the time, Fitzpatrick said not enough facts had been issued to responsibly write legislation. “I think that there’s plenty of opportunity to get it wrong,” said Fitzpatrick. “I think until we have significantly more information than we have right now, yeah I don’t think there should be any legislation passed until we know quite a bit more than what we know right now.

So far, federal prosecutors have taken action against one person in connection to the duck boat tragedy.  A grand jury indicted 51-year-old Kenneth Scott McKee, the vessel’s captain, on counts of misconduct, negligence, or inattention to duty by a ship’s officer, resulting in the death of another.