You are here: Home / Crime / Courts / Missouri State Highway Patrol to be visible on roads throughout Thanksgiving holiday (AUDIO) 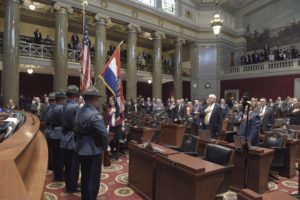 “And the traffic is going to be heavier, it’s going to be even more important to pay attention, to be very vigilant and paying attention to not only to what’s going on in your car but also in all the cars around you,” Hotz says.

17 people were killed and another 555 people were injured in Missouri traffic crashes during the 2017 Thanksgiving holiday.

The 2018 counting period begins tonight at 6 and runs through Sunday night at 11:59.

Hotz says Missouri state troopers are urging you to put your phone down, follow all traffic laws and to stay sober as you drive throughout the holiday weekend.

“We’re kind of giving the troop commanders the ability to evaluate the areas where they’re seeing a higher number of traffic crashes or traffic violations,” says Hotz.

Captain Hotz reminds you to make sure your vehicle is in good condition before your Thanksgiving trip, and to be well rested before driving.

Troopers encourage you to call *55 on your cell phone if you see criminal activity on the highway or experience an emergency.

The Highway Patrol also says mild weather will likely lead to boaters on the water during the Thanksgiving holiday weekend.

Sunny skies and 60-degree temperatures are expected at the popular Lake of the Ozarks on both Thanksgiving Day and again on Saturday. Hotz reminds you to wear your life jacket and to bring extra clothes.

“We also know that body heat escapes the body much faster in the water, so it is critical if you do fall overboard, hypothermia can become a concern very quickly,” Hotz says.

Since there is less daylight in November, Captain Hotz says your vessel’s navigation lights are essential. He recommends checking your lights and to have extra bulbs on board.

There will be troopers on the water during the holiday weekend.

Click here to listen to the full interview between Missourinet’s Brian Hauswirth and Missouri State Highway Patrol Captain John Hotz, which was recorded on November 20, 2018: