(NASCAR)—Joey Logano, the odd man in for the championship race ending the NASCAR season, has outrun the “big three” of 2018 to claim his first Cup title.  Logano swept past defending national champion Martin Truex, Jr., with twelve laps to go and quickly built a lead Truex could not overcome.  The margin at the end was more than 1.7 seconds. 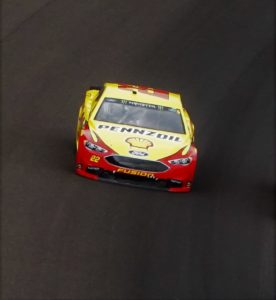 Logano was the “plus one” in the final four of “The Big Three Plus One,”—former champions Kyle Busch, Kevin Harvick, and Martin Truex Jr., who had won twenty of the previous thirty-five races this year.  Logano had won only twice, including the first race in the semi-final round that guaranteed him a slot in the four-driver run-off at Miami Homestead Speedway.

The championship is Logano’s first. The others had won one each.

Logano was only eighteen when he ran his first Cup race and was fulltime in the series in 2009 for Joe Gibbs Racing (taking over from Tony Stewart when Stewart founded his own team) when he was 19, the year he won his first of 21 career victories.  But he had only two more wins for Gibbs before moving to Roger Penske’s team in 2014.

He is only 28 years old although he’s been racing in NASCAR’s top series for eleven years.

(NASCAR-McMurray)—Whether Joplin driver Jamie McMurray’s sixteen-year NASCAR Cup career has seen him in the driver’s seat for the last time, or the next-to-last time, or just the last time with Chip Ganassi Racing seems unresolved.  The Homestead-Miami race was the 582nd of his Cup career.  He says he is not actively looking for a ride next year.

He has an offer on the table to drive a Ganassi car in the 2019 Daytona 500, then to become a consultant for Ganassi Racing, filling a role similar to one filled in Ganassi’s IndyCar program by Dario Franchitti.   McMurray says he’d like to do a few races next year although he won’t say what series he’d be in. “I’ve talked to a lot of drivers that have recently went through it (referring to retirement), and everyone’s story is exactly the same.  And so if I feel the way that they do, I’m looking forward to three or four races into next year.” But he doesn’t want to run just to run. “I like this team and I have so much history, I didn’t want to bounce somewhere else for a year and be unhappy.” 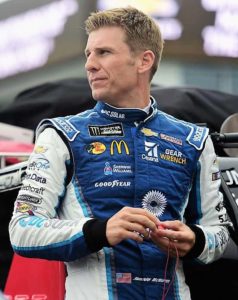 McMurray, who at 42 is one of the older drivers still in the Cup series, says he has talked a lot with “my best friend,” Matt Kenseth, who was pushed into retiring when he lost his ride with Joe Gibbs Racing but has returned for fifteen spot starts with Roush.  (Kenseth’s seventh-place finish at Phoenix last weekend was his first top-ten finish of the year. He followed it with his best run, a sixth, at Homestead. His average starting position has been 22nd; his average finish was 20th.  McMurray’s apparent last season in Cup has seen him starting 18th on average, with an average 19th finish. At Homestead, he started 21st and was 18th at the end.

In his talks with Kenseth and other drivers who have retired, he says, “Every single one of those people that have transitioned out have called and told me the same story, and it’s all ended in a good way.”

McMurray set a NASCAR record by winning a Cup race in only his second outing.  He was substituting for the injured Sterling Marlin at Charlotte in 2002 when he beat defending national champion Bobby Labonte to the finish line by .35 second.  The record was broken when Trevor Bayne won the Daytona 500 in his first Cup race in 2011.  But Bayne’s career has never taken off and he was replaced in his car for fifteen races this year by Kenseth.

McMurray’s retirement will leave Missouri without a native son in NASCAR’s top series since 1984, when Rusty Wallace moved into a full-time role.  He ran his first Cup race in 1980.  We have declared Clint Bowyer an “adopted” Missourian because he maintains a place at the Lake of the Ozarks although he considers his hometown to be Emporia, Kansas, which isn’t too far across the state line.

(INDYCAR)—How about watching the first Indianapolis 500 IN COLOR?

The Smithsonian Channel’s “America in Color” series has colorized film from the 1911 Indianapolis 500.  This is how the Marmon Wasp  looked that day Including the white tires).

(FORMULA1)—Formula 1 calls it a year after next weekend’s Grand Prix of Abu Dhabi.  There’s not much to decide.  Lewis Hamilton already has been crowned champion. Mercedes has won the manufacturer’s title again.