An eastern Missouri city can look to a post office named after one of its fallen heroes on the observance of Veterans Day 2018. 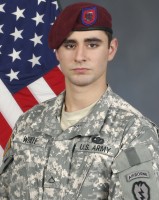 White, who was 10 years old when the attacks on 9/11 took place, enlisted in the U.S. Army in October 2009 at the age of 19.  He was deployed to Afghanistan in December 2011.  Just days before a scheduled leave on April 3, 2012, White died of injuries sustained from an improvised explosive device (IED) detonated near his mounted patrol in Khost Province, Afghanistan.

Central and eastern Missouri Republican Congressman Blaine Luetkemeyer introduced legislation in November 2016 to dedicate the post office in honor of White, who graduated from Pacific High School in 2008.  After the House and Senate passed the bill to recognize White, President Trump signed it into law on March 16th of this year.

After completing basic and advanced training at Fort Benning, Georgia, White was stationed at Joint Base Elmendorf-Richardson in Anchorage, Alaska before being deployed to Afghanistan. During his time in the Army, he earned him a number of awards and decorations including the Bronze Star and Purple Heart.

Luetkemeyer joined White’s family for the official dedication of the Pacific Post Office in his memory in August.  The Congressman said he was humbled to be among the many people present to pay tribute to a local hero.

“In the face of great sadness, the White family has taught us all a lesson in strength and grace,” said Luetkemeyer.  “We sometimes forget that the families of our soldiers also must live their lives knowing their entire world can be turned upside down in a moment and without notice.  Their bravery and service, just like Jeffrey’s, is something for which we are all eternally grateful.”

White grew up in eastern Missouri’s Catawissa with his parents, Jeff and Paula White and his brothers Michael and Kyle.  The Pacific post office named in his honor is located about 35 miles southwest of inner-city St. Louis.

The naming of post offices after persons has become a common practice in the last 10-15 years.