(NASCAR)—Missouri’s last hope of seeing a driver with a tie to the state race for NASCAR’s championship next weekend evaporated on the 133rd lap of the final qualifying race at Phoenix when a blown rear tire sent Clint Bowyer’s car into the wall, leaving the car too badly damaged to continue.

At the end of a race filled with ups and downs for the eight drivers competing for the final four championship race slots, the “big three” who have dominated the 2018 Cup season—Kyle Busch, Kevin Harvick, and Martin Truex, Jr.,—made it into the championship round, joined by Joey Logano, who claimed his place by winning at Martinsville in the first race of the semi-final round. 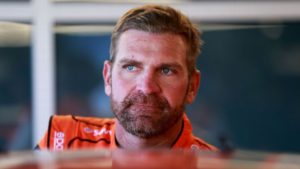 Bowyer, a native of Emporia, Kansas who enjoys the time he spends at his vacation home at the Lake of the Ozarks, started the race at Phoenix in a must-win situation.  He had made the semi-final round of eight but struggled at Martinsville and finished 21st and suffered through a problem-filled race at Texas a week ago and finished 26th.  He was running seventh at Phoenix when a flat left rear tire sent his car into the wall. He finished 35th.

With only the race at Miami-Homestead next weekend, Bowyer already has had his best year in several years.  He has won twice, the first time he’s seen victory lane since 2012. His nine top-five finishes are the most since 2013 and his fifteen top-tens are his most since 2014.

Missouri’s other Cup driver, Jamie McMurray, ran in mid-pack most of the race but after a series of late-race wrecks eliminated several front-runners–one of which damaged McMurray’s car–he finished sixth, his best finish since his runner-up at Charlotte six races ago.

The finale next weekend matches three of the last four NASCAR champions (Harvick in 2014, Busch in 2015, and Truex last year) against Logano, who was second in 2016, a year many Missourians will remember for the late-race crash with Columbia’s Carl Edwards that kept Edwards from winning the championship (Edwards quickly admitted the collision was his fault) in his last Cup race.  Busch and Harvick have each won eight races this year. Truex has four victories and Logano has two.  The driver with the highest finish at Homestead next weekend will be crowned the NACAR Cup champion for 2018.

(INDYCAR)—Two-time Formula One champion Fernando Alonso will return to the Indianapolis 500, trying to a second time to win a race he considers one-third of the triple crown of international racing.  McLaren will not field its own car but will sponsor with an existing team. An announcement will come later about which team will field a car for Alonso 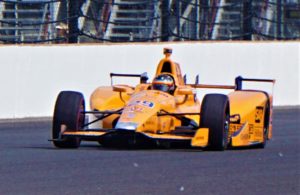 Alonso was immensely popular when he interrupted his 2017 F1 schedule in 2017 to run as a rookie, sponsored by McLaren, his F1 manufacturer.  He ran well, started fifth, and led 27 laps before the engine in his Andretti Autosports car let go with twenty laps left. He was declared the race’s Rookie of the Year.

“I had an incredible experience at Indianapolis in 2017 and I knew in my heart of hearts I had to go back if the opportunity was there,” he said in a statement. “It’s a tough race and we’ll be up against the best, so it will be a huge challenge. But we’re racers and that’s why we race. One of the things I’m looking forward to most is seeing the fans again, who are absolutely fantastic.”

Alonso has won a Grand Prix race at Monaco and was a member of a winning team at this year’s Le Mans 24 Hours.  England’s Graham Hill is the only driver to have won the triple crown, winning at Indianapolis in 1966.  Hill suggested the triple crown should include a Formula 1 championship instead of the Monaco GP.  Hill qualified under that criteria, too.

Adding the F1 title to the list might be considered a “grand slam” of motor racing.  Alonso has won twice at Monaco to go with his two F1 titles.

(Formula 1)—Already-crowned F1 champion Lewis Hamilton picked up a win he didn’t think he would be getting in the Brazil Grand Prix when leader Max Verstappen collided with a backmarker and spun out of contention.

Verstappen had roared past Hamilton but collided with Force India’s Estaban Ocon, as Ocon—on fresher tires—tried to unlap himself on the inside of a turn.

Previous Post: « High School Football Playoff scoreboard from 11/9
Next Post: This time Mizzou holds on for a win »