You are here: Home / Elections / Missouri Democratic congressman worried his party will get bogged down with impeachment

Missouri’s Kansas City-based Congressman Emanuel Cleaver is cautioning his fellow Democrats not to rush in and try to impeach President Trump. 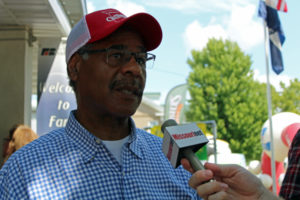 The congressman tweeted a video appearance on FOX News with commentator Neil Cavuto Friday in which he acknowledged some U.S. House members wanted to move quickly against the President.  “For me to suggest that there are not those who would like to impeach the President would be untruthful,” said Cleaver.

Democrats took back the House in Tuesday’s election.  The party currently has a 225-200 seat edge over Republicans, and that number could climb higher as 10 races are still not determined as of late Friday morning.  Republicans still control the Senate.

Exit polling by CNN on election day showed 77% of self-identified Democrats supported impeachment, compared with just 5% of Republicans and 33% of independents.

After President Trump fired Attorney General Jeff Sessions Wednesday, Democrats are worried he’ll try to shut down special counsel Robert Mueller’s investigation of Russian meddling in the 2016 election.  Trump replaced Sessions with Matthew G. Whitaker, an alley who is seen as likely to disrupt the Mueller investigation after making comments highly critical of the probe.

House Democrats have made clear they plan to hold hearings, call witnesses and investigate the President’s actions with the authority they’ll gain when the new Congress convenes in January.

Cleaver told Cavuto he’s troubled some of his fellow Democrats are insistent on preserving Mueller’s investigation while also calling for impeachment.  “Either you want Mueller to finish the report and then you evaluate it, or you just want to impeach the President without the report,” Cleaver said.  “I mean, this is a tough time, but we’ve got to be extremely careful.”

Trump said Wednesday that Republicans in the Senate would retaliate with investigations of their own and refuse to work with Democrats if they pursued what he considered unfounded investigations into his administration.  Democratic leader Nancy Pelosi had made an effort to strike a conciliatory tone before the President’s move to fire Sessions, promising to work with Republicans while standing their ground when necessary.

Cleaver told Cavuto he thinks President Trump might be trying to goad Democrats into a fight over the Mueller investigation and impeachment.  “The President, frankly hasn’t helped calm the waters, but I don’t add to it, I don’t want add to the turbulence,” said Cleaver.

The now eight-term Missouri Congressman from the state’s 5th District was emphatic about Democrats avoiding distractions in his tweet.  “Our goal in Congress should be to pass policies that benefit the American people, period.”

Our goal in Congress should be to pass policies that benefit the American people, period. Always enjoy speaking to @TeamCavuto https://t.co/6IatCnD52a

Cleaver won his election with roughly 62% of the vote in a district that stretches from Kansas City eastward into Missouri farm country, including Lafayette and Saline counties, where voters tend to be more conservative and Republican.

Among the Congressional Democrats who have been the most vocal about impeaching President Trump is Representative Al Green of Texas, who won re-election Tuesday with 89% of the vote.