Nicole Galloway has been elected as State Auditor. The Democrat, who was appointed to the position in 2015, defeated Republican Saundra McDowell, the Constitution Party’s Jacob Luetkemeyer, Libertarian Sean O’Toole and the Green Party’s Don Fitz in Tuesday’s general election. 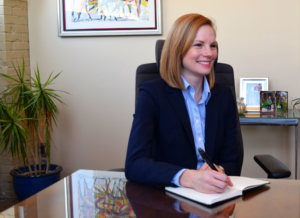 Galloway says taxpayers want an independent watchdog that will call balls and strikes.

“I have a reputation of auditing Democrats and Republicans alike, and being tough but fair and thorough on behalf of taxpayers,” Galloway says. “People work hard for what they have and they want their tax dollars to be used efficiently and effectively. I have demonstrated that over and over again from the very beginning.”

She was appointed to her job by former Gov. Jay Nixon. She previously served as the Boone County Treasurer in mid-Missouri.

Galloway says one of her priorities will be working with the Legislature to pass a bill addressing public corruption. The bipartisan measure passed but was vetoed by former Gov. Eric Greitens.

She says the bill allowed her office to partner with local law enforcement when there was known instances of public corruption. It also strengthened the penalties for public officials who stole from the taxpayer.