(NASCAR)—Kevin Harvick’s win at Texas guarantees he’ll be one of the four drivers with a shot at NASCAR’s biggest championship in two weeks at Miami-Homestead.  Harvick pulled away from pole-winner Ryan Blaney  in overtime to pick up his eighth win of the year.  He and Joey Logano, last week’s winner at Martinsville, will make up half of the championship field when the green flag drops at Homestead. 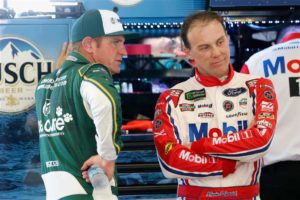 Sometime-Missourian Clint Bowyer (with Harvick) must win at Phoenix to run for the title. His hopes at Texas evaporated on the first lap when his car slid up-track to hit Denny Hamlin’s car.  He finished 26th, three laps down, and has no chance of making the final four on points.  The normally loquacious Bowyer, who started on the outside of the front row, had little to say after the race—only that he has to go to Phoenix and “go get ‘em.”

(CARL EDWARDS)—Carl Edwards, the more-or-less retired Columbia driver, made one of his infrequent visits to a NASCAR race this weekend.  Edwards was inducted into the Texas Motor Speedway Hall of Fame.

Edwards stepped away from racing after the 2016 season and says he misses driving a race car and misses the people of NASCAR. 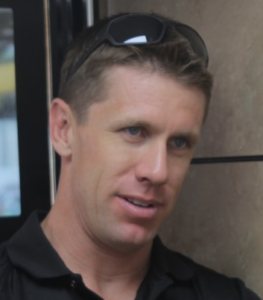 He told a NASCAR interviewer that he misses the challenge.  “My competitors, even when you hate each other and you’re at each others’ throats. It’s like, those are the people that actually drive you to try to be your best, “ he said. “I told somebody the other day, I miss the meetings where you’re arguing with your teammate about something … It’s that kind of, I guess you’d call it adrenaline. Or excitement or challenge. And that’s the cool thing about races is you get to go battle every week. That’s something I miss.”

But he says he’s not interested in “going back and doing anything serious.”  And he says he tries not to pay attention to NASCAR  because, “I don’t think I can follow it without wanting to participate.”

He says he’s been having a “ton of fun” with his family—including taking his boat across the Atlantic twice.  You can watch the interview here:

(INDYCAR)—Mari Hulman George died last week. She was 83, the daughter of Tony Hulman, Jr., who bought the Indianapolis Motor Speedway from Eddie Rickenbacker and rescued the weed-overgrown track and the Indianapolis 500.   Mari became the Chairman of the Board of the Speedway in 1988 and moved to emeritus status two years ago.

Former “500” winner Bobby Rahal referred to her as “every driver’s mother.”

She was a pioneer woman racing team owner in the 1950s and once fielded a car for the Indianapolis 500 with her husband, Elmer, as the driver.

(FORMULA 1)—The Grand Prix of Brazil is next up for Formula 1, next weekend.  The season ends on November 25th at Abu Dhabi.

Previous Post: « Just an average day for the Chiefs in their win over Cleveland
Next Post: Meet Missouri’s Constitution Party candidate for state auditor »