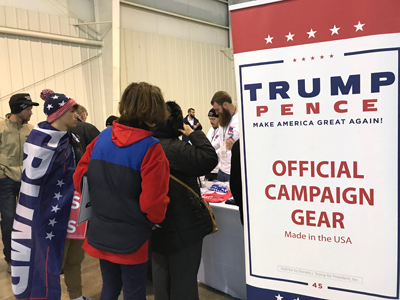 Rain and colder temperatures did not seem to impact the crowds, some of whom camped out in tents overnight near the airport. Many wore winter coats and gloves during the event, which was outdoors.

The event was billed as a rally to support Hawley, but signage, jumbotrons, souvenirs and ubiquitous “Make America Great Again” caps were all Trump. At our observation, attendees were split almost evenly between men and women of all ages. 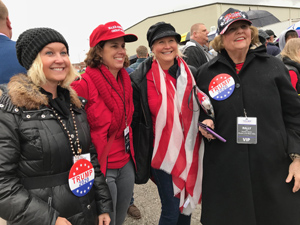 We spoke to dozens of people in line who were attending their first Trump event.

Air Force One pulled up to the bleachers at the hangar and the crowd welcomed the president’s entrance with concert-pitch enthusiasm.

Two topics that resonated with this crowd include the current caravan going through Mexico and the recent U.S. Supreme Court nomination involving Judge Brett Kavanaugh.

“A few weeks ago we achieved that historic victory for our Constitution and for the rule of law. We defeated the Democrat mob and proudly swore in the newest member of the United States Supreme Court,” Trump says.

“This will be the election of (Judge Brett) Kavanaugh, the caravans, law order, tax cuts, and common sense,” says Trump.

Defending his wish to ban birthright citizenship, which to date has been allowed by the 14th Amendment, Trump dubbed it “birth tourism” during his approximately one-hour speech.

“Where pregnant mothers from all over the world traveled to America to make their children instant lifelong citizens with guaranteed everything,” he says.

President Trump told the audience to send Josh Hawley to the U.S. Senate next week and zeroed in on Democratic incumbent Senator Claire McCaskill by name.  Hawley joined Trump on stage and likened his opponent to Hillary Clinton, amid chants of “lock her up.”

While the rally happened in rural Missouri, the visit has attracted major news media attention from national outlets because of Missouri’s U.S. Senate race. Many analysts believe it could determine which party controls the Senate in January.