You are here: Home / Elections / Sources: President Trump is coming to southeast Missouri before election

President Donald Trump will be in southeast Missouri before the General Election on Nov. 6. KFVS-TV reports its sources say the President will be in Cape Girardeau next Monday, November 5, the day before the election. 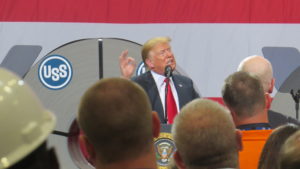 Details on the time and location of the President’s visit to Cape Girardeau have not been revealed.
Last month a rally in the city had to be canceled as the President dealt with Hurricane Florence. That appearance was scheduled to take place in the Show Me Center on the campus of Southeast Missouri State University, in Cape Girardeau.

Republican Congressman Jason Smith, who represents southeast Missouri said he had been working to bring President Trump to the region since Trump was elected into office in 2016. At the time, Congressman Smith said he would continue to encourage the President to reschedule.

The President’s campaign announced another stop last week in Missouri that takes place this Thursday, November 1st, in mid-Missouri’s Columbia.

During the Columbia and Cape Girardeau visits, Trump is expected to campaign for Missouri State Attorney General Josh Hawley, who is locked in a tight race with incumbent Democratic Senator Claire McCaskill for the seat.

The Missouri U.S. Senate contest is a key battleground in the fight between the parties for control of the chamber.  Republican hold a 51-to-49 edge in the Senate and hope to increase their numbers as numerous vulnerable Democrats are defending their seats in states Trump won, in some cases by wide margins.