(NASCAR)—Expected tight paint-trading racing on the Martinsville half-mile has left Joe Logano guaranteed of a spot in the season’s final race in which four drivers will run for the NASCAR championship. Logano bumped leader Martin Truex Jr., on the last turn and got under him for the pass.  Denny Hamlin also slipped past Truex, who fought to get his car straight by the time it crossed the finish line. The win guarantees Logano a chance to go the title next month. 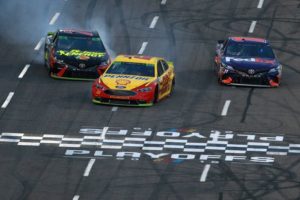 “I was next to him for six laps and I never knocked him out of the way,” said Truex. “It’s a cheap win; I hope he’s proud of himself.”

“I’ll remember that if he’s in front of me coming to the checkered flag,” he said, referring to the championship race at Miami. “He may have won the battle but he ain’t winning the damn war.”

Logano had no regrets: “He raced really clean and I laid the bumper to him, so I don’t expect him to be happy.  We had to do what we’ve got to do…It was our shot. It may be our only show, so we had to make it happen.”

The same tight racing has put Clint Bowyer in a must-win situation in one of the next two races. Bowyer had a solid day going until lap 458 in the 500-lap race when his car was tagged by Jimmie Johnson as the cars went into the third turn, causing Bowyer to spin. He lost two laps in the incident and finished 21st.  The finish left him seventh in the points, sixty-three points behind the fourth playoff spot, a hole likely too deep to dig out of.

The final four who will run for the NASCAR title will be determined on the basis of wins and points after two more races.

Joplin’s Jamie McMurray also ran into trouble late in the race when he blew a tire on lap 367.  He managed to stay on the leader’s lap, however, and finished sixteenth.

NASCAR’s next race is at Texas Motor Speedway on November 4.

(FORMULA 1)—Two winners emerged from the Mexican Grand Prix this weekend: Max Verstappen the race but fourth-place finisher Lewis Hamilton locked up the F1 points championship.  Sebastian Vettel, who finished second in the race, will finish second in the points standings when the season ends two races from now.

Hamilton, who is from the United Kingdom, becomes only the third driver in F1 history to claim at least five championships, tying Juan Manuel Fangio—who raced in the 1950s—and Michael Schumacher, who won seven titles before retiring in 2006.

(INDYCAR)—Driver Robert Wickens has announced that he is a paraplegic because of the spinal injuries he suffered in his crash in mid-August at the Pocono Speedway. He says he’s paralyzed from the chest down.  But he has taken to Twitter  to explain his condition might not be permanent. 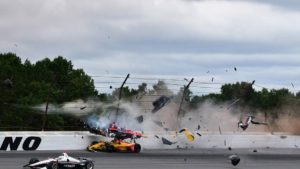 Wickens say doctors have told him his spinal cord injury is “incomplete,” meaning the spine was not severed, only severely bruised. “The nerves may be able to find a way back to my legs,” he wrote. “In months [sic] time the swelling will go down and we will learn more on how much nerve regeneration happens.”  He has vowed to walk again although it might take him a couple of years to do it.

He says he has most feeling and some movement in his legs.