You are here: Home / Agriculture / Missouri Ag Director meets with Trump and Perdue in D.C. 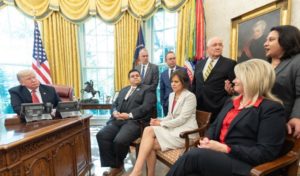 Missouri Ag Director meets with Trump and Perdue in D.C.

“That was a great honor to carry the story of agriculture to the Oval Office. We talked about a lot of the challenges that rural America faces. We thanked the president for bringing attention to rural America,” she tells Brownfield Ag News.

Chinn says she also thanked Trump for funding to expand rural broadband internet access, tax cuts that are helping farmers and ranchers, for the expansion of E15 gasoline and the new trade agreement with Canada and Mexico.

She says she also had the opportunity to thank Perdue for his help with Missouri’s drought issues.

“He was really quick to identify that we needed the natural disaster declarations so that we could release those federal funds,” she says.

Chinn says she also thanked the Secretary for “the deregulation that’s happening across this administration and the benefit that it’s had for agriculture, especially Missouri farmers and ranchers.”

Chinn says it’s vital to farmers and ranchers that the administration “saw the harm” in the Waters of the U.S. rule (WOTUS), rescinded it and is working on a replacement.