Biological sciences professor Candace Galen says bees were silent as the Earth fell into complete darkness during last year’s historic eclipse. As the eclipse passed overhead, MU researchers, including scientists, volunteers and elementary school students and teachers in Missouri, Idaho and Oregon, including over 200 elementary school students and teachers from Columbia Public Schools, gathered audio data on the behavior of bees. 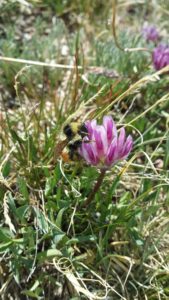 Photos courtesy of the University of Missouri

“Getting dark in the middle of the day is not something that happens in a bee’s normal life,” she says. “It’s a behavioral miscue. Here darkness is a cue for night, that a bee is familiar with, but it’s coming at the wrong time of the day. Did they use it as a cue or not, even if it is completely out of context? What we found is yes, they do.”

Tiny microphones the size of a USB flash drive were placed at 16 locations with bee-pollinated flowers that were away from human-generated traffic.

Earlier research on bee behavior has found that bees usually fly slower at dusk and return to their colonies at night. In Galen’s study, researchers discovered that bees completely stopped buzzing during totality, but they continued to fly during the periods of reduced light that occur in the phases of a partial eclipse.

“It’s a soundscape,” Galen says. “What we have is a buzz that is longer. Either the bees were flying more slowly or making longer flights.”

A grant from the American Astronomical Society helped to fund the study.