You are here: Home / Education / ACT scores show Missouri students continue to slip – 22% of 2018 class is ready for college

Missouri’s 2018 graduating class earned an average composite score of 20 out of a possible 36 on their ACT test. The exam is used to help determine how prepared students are for college. According to the ACT organization, 22% of Missouri graduates met all four ACT college readiness benchmarks in 2018, compared to 23% in 2017 and 29% of 2014 graduates. 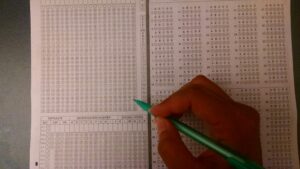 About 22% of Missouri students are ready for college

In math, 33% of 2018 graduates met the college readiness benchmark, 56% met the English benchmark and 41% reached the Reading benchmark.

The data also shows that the racial gap in student achievement continues. Asian students have the highest average score of 23.2, followed by white students with 20.9, Hispanics earing an 18.7 and African Americans with 16.5. All of the scores are slightly lower from the previous year.

More than 68,000 Missouri students took the ACT as 11th graders. Missouri was among 17 states in which 100% of the graduating class took the exam. Missouri’s composite score of 20 was the sixth highest among those states, tying with Montana and Wyoming.