Missouri voters will have a chance to raise the state’s minimum wage in November’s election.  The measure – Proposition B – would hike minimum pay gradually for five years and top out at $12.00 per hour in 2023. 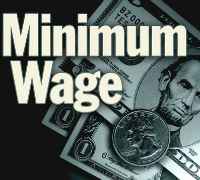 Boosting minimum pay any faster will require a change from the legislature or through a ballot measure.  The Republican-dominated General Assembly has moved in the opposite direction, however, passing a bill to squash local wage hikes in 2017.  The measure preempted a city ordinance in St. Louis that would have set wages at $11.00 this year.  It also prevented an increase to $15.00 by 2022 in Kansas City that city voters had approved by a 75% margin.

There’s only been scattered polling on Proposition B, although a Missouri Scout survey from early August showed strong support with 60% of likely voters in favor of its passage while 28% opposed it.

Between the two candidates in Missouri’s marquee Senate race,  Democratic incumbent Claire McCaskill supports the ballot measure while Republican challenger Josh Hawley has said it might result in lost jobs.

Tony Wyche is with Raise Up Missouri, the campaign committee supporting Proposition B.  He says Missouri’s minimum wage, which adds up to $314 for a 40-hour work week, is unsustainable for most people.  “The cost of everything from food, shelter, clothing, transportation has gone up and wages haven’t kept pace,” said Wyche.  “And that’s what this really is all about.  It’s making sure that people who work fulltime are able to provide for their families and take care of their families just like everybody else who works hard is able to do.”

Patrick Toohey with the St. Louis based free-market group Show-Me Institute contends that raising the minimum wage is the least effective way to raise people out of poverty.  “Even President Obama’s chair of the Economic Advisory Panel said that if we want to fight poverty, minimum wage legislation is a really bad way to do that,” said Toohey.

Toohey points to a study conducted by the Show-Me Institute that actually shows hiking minimum pay primarily benefits middle-income households rather than low-income people because the larger percentage of minimum wage workers are members of middle-income families.

In data compiled for the study, only 12.7 percent of workers earning a wage less than $7.25 were in poor families, while 44.6 percent — or nearly half, which Show-Me Institute contends are likely teenagers or other secondary workers — were in families with incomes three times the poverty line (or approximately $63,000 in 2008 for a family of four) or higher.

Toohey contends there are too many negative factors that stack up against any sort of minimum pay increase, and further points out a 2015 study which shows that hiking minimum pay hurts first-time job seekers.

Still, there are plenty of studies showing how minimum wage doesn’t have the perceived negative impact on jobs or the economy. One study from UC Berkeley researchers, suggests that California will actually gain jobs because of its minimum wage hike by 2023.

A 2011 study, “The Spending and Debt Responses to Minimum Wage Increases” by the Federal Reserve Bank of Chicago stated that “every dollar increase in the minimum wage results in $2,800 in new consumer spending per household over the following year.”

According to Raise Up Missouri’s Wyche, 460,000 residents who live outside the metro St. Louis and Kansas City areas make minimum wage.  He contends business owners also benefit when they pay their workers more money.  “They know that it’s better for their bottom line,” said Wyche.  “It helps them retain employees who are happier and more loyal.  They don’t have to go through all the staff turnover and retraining costs.  And it makes for a better work environment overall in their establishments.”

Missouri Business for Fair Minimum Wage is part of a national group that advocates for hikes in minimum pay across the country.  It’s been supporting Proposition B along with Raise Up Missouri.

$1.74 million has been donated to Raise Up Missouri for Proposition B.  A majority of that sum, $1 million, has come from Sixteen Thirty Fund, a nonprofit 501 (c) (4) organization that is not required to disclose the name and address of any contributors.  As of October 4, Raise Up Missouri had spent $1.08 million.

Previous Post: « Missouri’s governor hopes to see more young people get involved in agriculture
Next Post: Bill Pollock Show–Charges filed after fan douses #Chiefs Hill with beer. #Mizzou to face top RB in the nation–Love thy neighbor but only if they have a key fob (PODCAST) »