The Missouri Highway Patrol is trying to alert motorists about seasonal dangers on the state’s roadways. The fall harvesting season, which is currently in progress, brings farm machinery into traffic lanes across Missouri. 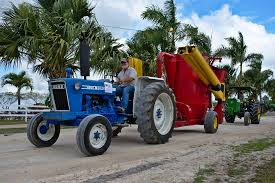 There were 174 accidents involving farm equipment in 2017. In those crashes, five people were killed and 50 were injured. So far in 2018, there have been at least 100 collisions involving farm vehicles, resulting in three fatalities.

Highway Patrol Sergeant Jason Pace thinks most of the crashes are the result of drivers misreading the intentions of farmers behind the wheel of a tractor.

“I think a lot of those collisions that we see throughout the state are whenever those drivers are attempting to pass that tractor, that farm machinery, while it’s attempting to make a left turn,” says Pace. “Often times it may appear they’re pulling to the shoulder, when in reality they’re making a left-hand turn, maybe taking a wide turn. That’s where we see a number of crashes throughout the state.”

The Highway Patrol says it’s important for motorists to watch the farmer’s hand and light signals closely when following from behind. Sergeant Eric Brown says motorists can avoid a mishap by simply being patient when traveling behind slow-moving farm equipment.

“Be aware that they are going to move off the roadway and let you by as soon as they can,” says Brown.

The Highway Patrol also sets guidelines for agriculture machinery operators, calling for them to drive as far to the right as possible and pull off the side of the road on a level area when there’s a traffic buildup behind so that vehicles can pass.

A law passed by the Legislature in 2017 allows farm equipment to travel on roads 24 hours a day, instead of the daylight hours they were previously restricted to. Such machinery must have a white light on the front, a red light in the rear and must be able to be seen from at least 500 feet away.

The Highway Patrol suggests that farmers try to avoid traveling on roads at dawn or dusk when it’s more difficult for other vehicles to see, and advises drivers to pay special attention when traveling at those times.

ATVs being used for farming can only travel on highways during daylight hours and must be equipped with lights, a bicycle flag, and a “slow-moving vehicle” emblem.

Farm vehicles are prevalent in rural Missouri where agriculture contributes a major portion to the state’s economy. According to figures compiled by the state Department of Agriculture, the industry has an $88.4 billion economic impact on Missouri.