A civil engineer at Missouri University of Science & Technology in Rolla says the 2011 Joplin tornado inspired her to build tornado simulators. Dr. Grace Yan has already built two small-scale versions and is working on a third one that could be the largest of its kind in North America. Yan tells Missourinet she’s researching wind pressure on civil structures when such natural disasters wreak havoc on communities.

“We need to do more research on this type of hazard so we can protect our civil structures,” she says. “The Joplin tornado killed a lot of people and caused $2.8 billion of property loss. It’s just 200 miles from us. As a civil engineer, I do want to do something to make the Midwest a better place to live.”

The tornado ripped through central Joplin, killing 161 people and destroying more than 500 businesses.

Missouri, Iowa, Kansas, Texas and Oklahoma encompass an unofficial geographic designation known as Tornado Alley – spawning many tornadoes each year, some of which cause major property destruction. Yan, who grew up in China, did not live where tornadoes are common.

Yan has a grant from the National Science Foundation to find out the structural conditions under multi-hazard environments. 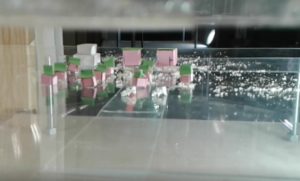 “If the model is larger, we can put more pressure taps, that’s a sensor to a type of pressure, we can get better pressure data,” she says.

Yan says since the field environment is so challenging, she uses numerical simulation.

Yan is also developing a virtual reality animation that would allow users to estimate how their homes would fare in a tornado. In turn, it would help them decide whether to reinforce their structures. She hopes it will increase the community’s tornado risk awareness to guide them on how their homes can better survive in such disasters.

Previous Post: « Wainwright will be back for one more year with the Cardinals
Next Post: Appeal and emergency stay filed as Ashcroft says judge’s decision creating “mass confusion” at polls »