(NASCAR)—Late-race crashes on the Monster Mile at Dover have scrambled the standings for the NASCAR playoffs and helped Chase Elliott lock in a spot in the next round.,

Elliott won the race in overtime, his second victory of the year.  Going into the race, Elliott was one of the four drivers below the cut line for advancing to the playoff round of eight. 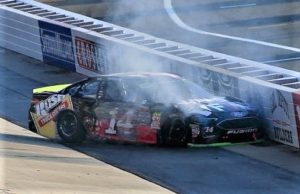 Sometimes Missourian Clint Bowyer, who had been well above the line at the start of the race ran strongly all day and was in sight of his second straight top-five finish when a loose wheel forced a late pit stop and a blown tire put his car into the wall and dropped him to a bottom-five finish.

Bowyer heads to the uncertainty that is Talladega next weekend tied for ninth in the standings, ten points behind eighth place.  Talladega and Kansas will determine the eight drivers moving to the semi-final championship round.

Joplin’s Jamie McMurray, who started twentieth was able to improve his position by only two slots by the end of the race.

(Formula 1)—Lewis Hamilton could clinch his fifth F1 championship in the United States in two weeks.  His victory at the Grand Prix of Japan gives him a big enough lead that he needs only to score eight more points than challenger Sebastien Vettel in the last four races to claim his fifth world championship.

Hamilton started from the pole at Japan and took the lead on the start and was never headed. Teammate Valtteri Bottas, who started alongside on the front row came home second. Vettel, who started eighth, was involved in a collision as he challenged for third and re-started at the back of the field.  He was able to reach sixth by race’s end.

Hamilton has won five of the last Grands Prix of the United States and the Circuit of the Americas near Austin, Texas.  He’s seeking his fifth Formula 1 title which would time him with Juan Manuel Fangio, who raced in the 1950s, for second-most.  Michael Schumacher won seven titles in a nineteen-year career that ended with his retirement after the 2012 season.

This is Hamilton’s twelfth F1 season.  Fangio won his five titles in only eight years and was second in the standings twice.

Previous Post: « Chiefs defense steps up when Mahomes has a ho-hum game (by his standards)
Next Post: Hartzler and congressional committee work on differences to replace expired farm bill »