Closing arguments were made Monday in Jefferson City in a lawsuit challenging Missouri’s voter ID law. 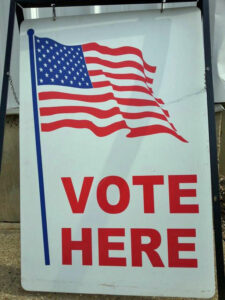 In 2016, voters passed a constitutional amendment, Amendment 6, by a 63 percent margin which allowed the state to make a law requiring voters to identify themselves with IDs that “may” include valid government-issued photo identification.  That same year the legislature passed a law thought to call on a person to submit a photo identification in order to vote in a public election.

What’s become known during the days’ long court case is that the law as implemented doesn’t actually require photo ID but does require those who don’t present a photo ID when voting to sign a sworn statement or affidavit.

The affidavit says the voter acknowledges that he or she doesn’t possess a photo ID and states that he or she is required to present approved photo ID in order to vote.  It also specifies that the person signing the document does so under penalty of perjury.

The law actually gives voters three option to vote.  They can cast a regular ballot by presenting a valid photo ID such as a driver’s license, but can also do so by presenting by presenting a non-photo ID such as a voter ID card or utility bill with the proper address if they sign the affidavit.  They can also cast a provisional ballot if they have no form of ID.  That vote would count if the voter returned later to the polling place with a photo ID or if the voter’s signature matched the one submitted when he or she registered to vote.

Interestingly, the law does not require those signing up to vote absentee sign the affidavit if they don’t have a photo ID

Missouri Deputy Attorney General Ryan Bangert represented the defendants, Secretary of State Jay Ashcroft and the state, in Monday’s closing arguments.  He said the affidavit does not place an undue burden on voters.

“The answer to that is no it doesn’t because we haven’t had any evidence of mass disenfranchisement or people refusing to vote because of the affidavit,” said Bangert.  He admitted the language in the affidavit was not perfect and could be changed by the secretary of state’s office to more clearly reflect the law.

Attorney Uzoma N. Nkwonta of the Washington law firm Perkins Coie represented the plaintiffs in closing arguments Monday.  He said the affidavit must be done away with.

For his part, Deputy Attorney General Bangert said affidavit is useful because it makes voters swear they’re Missouri residents casting a ballot at the correct polling place and does two more things.  “It attempts to educate the voters as to the availability of free photographic ID, Bangert said.  “And it also attempts to nudge those voters to obtain photographic ID. And they’re some good reasons for that.”

Bangert pointed out that photo IDs are processed much quicker at polling places and can be helpful in preventing long lines for individual waiting to vote.

In addition to the affidavit containing incorrect information, the plaintiffs also argued in closing statements that the rollout of the law was riddled with errors.

Nkwonta said ads published in all 116 voting jurisdictions in the state were misleading, noting they said voters would be asked to show photo ID in all elections after June 1st, 2017.  He further contended that the three options available to voters were not specified in the ads.

Cole County Circuit Judge Richard Callahan also pointed out to the state’s defense team that the rollout of the law has been hampered by errors, including in ads.  “The statewide advertising campaign as I see it, a great deal of it improperly suggested that photo ID was a requirement,” said Callahan.  “And a requirement, by definition, is something that’s needed in order to vote.  To the extent those ads gave that impression, that simply isn’t true.”

The state Supreme Court tossed a photo voter ID law passed by the legislature in 2006 because it didn’t provide for them to be free.  The new law deals with that problem by requiring the state to provide free photo IDs.  But the plaintiffs argued Monday that the state has only provided a small fraction of free IDs to the hundreds of thousands of voters who don’t possess them.

They produced state figures that estimated more than 300,000 residents may not possess driver’s licenses for a variety of reason.  The number of voters who have received free IDs from the state number in the hundreds if the work of a St. Louis non-profit group is not included.  St. Francis Xavier College Church in St. Louis has assisted almost 800 people in obtaining photo IDs for free.

Nkwonta closed by calling on the court to require the secretary of state’s office to specify that voters are not required to have a photo ID to cast a regular ballot.  “Order the secretary of state to take steps necessary to make clear that individuals are not required to present photo ID in order to vote.  They can vote with all types of different forms of identification.”

The lawsuit seeks to have the photo voter ID law passed by the legislature in 2016 declared unconstitutional and therefore without the force of law.

Judge Callahan told both parties to file post argument documents and said he would announce his decision in the case at some point next week.