(NASCAR)—-Jamie McMurray and Clint Bowyer did well in the first race on the Charlotte Speedway’s new road course, better than they thought they would as the race wound down.  While other drivers were crashing out of winning contention and out of the championship runoffs, McMurray and Bowyer finished second and third behind Ryan Blaney—surprisingly.

They were running fourth and fifth as Martin Truex, Jr., and Jimmie Johnson battled throughout the last lap for the lead before Johnson overcooked it trying to pass Truex on the last turn and spun both of them out. 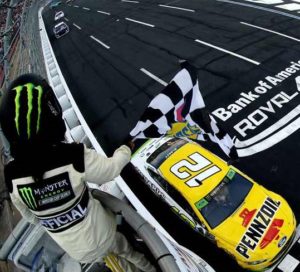 Blaney, McMurray, and Bowyer drove between the two temporarily-stopped cars with Blaney crossing the finish line about eight-tenths of a second ahead of McMurray with Bowyer close behind.  Johnson, who threw away a chance to advance into the second playoff round by trying for the victory, finished 8th.  Truex was thirteenth but started the race with enough of a points cushion to advance.

The Johnson-Truex collision was the second incident in the last six laps that changed the complexion of the race.  Leader Brad Keselowski hurtled into the first turn on a re-start on the 104th of the 109 laps, couldn’t slow and plowed into a tire retaining wall.  The fifteen-car pileup knocked out several cars and damaged others that limped to the end after a fifteen-minute red flag.

The second round of the playoffs begins next weekend on the Monster Mile at Dover.

(Formula 1)—Something Formula 1 has that we don’t see in American racing is team orders and this time the beneficiary of them says the situation left him feeling “weird.”

Lewis Hamilton won the Russian Grand Prix on the Sochi Circuit after Mercedes ordered teammate Valtteri Bottas to let Hamilton pass him for the lead. Hamilton says the result left him feeling “the most conflicted I have ever been.”

But a win is a win, particularly since it gives him a fifty-point lead on Ferrari’s Sebastien Vettel with five races left and only 125 championship points on the table.

Bottas was conflicted as well. “I had the pace for victory,” he said. He said he wasn’t ready for that decision and was confused by it.

“It wsn’t the result I wanted, but it was the result the team wanted,” Hamilton said afterwards.

Vettel, who finished third, thought the team decision “makes complete sense.” He told the BBC, “It is a bit dull for the race but it makes sense.”

(IndyCar)—The cars are in the shops but things are moving for IndyCar.  Competition president Jay Frye, the former Missouri football player, says the series has a plan that looks eight years out.

He says about twenty percent of this winter’s meeting with team managers will focus on next year but the rest of the discussion looks to 2020 when the first tests will be run of a slightly larger engine that will be used starting in ’21.  The 2.4 liter engines will produce about 100 more horsepower than the current 2.2 liter powerplant and will be used through 2026.

The series introduced a new aero package this year, got a new television contract, and saw TV viewership continue its slow but continued climb.  It’s looking for a new title sponsor and another engine supplier.

IndyCar has announced its testing schedule leading to next year, including open tests at two circuits that were not on the schedule this year: the Circuit of the Americas near Austin Texas, and Laguna Seca Raceway near Monterey, California—which is returning to the schedule after an absence of fifteen years.  The first tests will be in February at the Texas track.

The first of the seventeen races on the 2019 schedule will be on the streets of St. Petersburg, Florida, March 10.