The Environmental Protection Agency’s (EPA) announcement that it’s removing 70% of the radioactive material from the West Lake Landfill in suburban St. Louis is being heralded as a mammoth breakthrough. 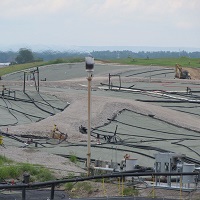 The move is a reversal of the EPA’s 2008 decision to cap-and-leave the waste at its current location which sits in the Missouri River floodplain.  West Lake Landfill along with close by Coldwater Creek are portions of the St. Louis area that have been contaminated by nuclear waste originating with the U.S. atomic bomb program of World War II, also known as the “Manhattan Project”.

Ed Smith, Policy Director for the St. Louis based Missouri Coalition for the Environment, says the EPA’s decision is a game changer.  “The fact that the EPA has pretty much pulled a 180 on the 2008 decision is a big deal,” said Smith.  “It’s monumental for the community that’s been working on the issue for a long time.  It’s a commitment to eliminating a significant portion of the radioactive material.

In February, the Environmental Protection Agency (EPA) announced plans to remove 67% of the radioactive waste at West Lake by digging to a depth of about 16 feet, while installing an engineered cover system for long-term protection.

The final plan calls for 70 percent removal and digging to a depth in some spots deeper than 16 feet.  The waste will also be stored at an offsite location.  The process is expected to take roughly five years at a cost of about $236 million.  The project will be financed by both federal and private money.

Republic Services, which owns the landfill site and energy giant Exelon, which owned the company that deposited the radioactive material at West Lake in 1973, are the private parties funding the undertaking.

The announcement follows a comment period and administrative process for the federal agency, which held an early March public meeting in the St. Louis area that was attended by more than 1,000 people.

A briefing was held by the EPA in St. Louis Thursday morning, which included a live viewing of a press conference in Washington D.C. with the agency’s Acting Administrator Andrew Wheeler.

State lawmaker’s attending the gathering in St. Louis included Democratic Senator Jill Schupp of Creve Coeur and Republican Representative Mark Matthiessen of Maryland Heights, whose district encompasses the landfill.  Democrat Maria Chappelle-Nadal of University City, whose Senate seat also surrounds the West Lake Landfill, and who has been the most vocal advocate for residents in the area, was not in attendance.

Chappelle-Nadal did release a statement in which she expressed guarded praise for the plan.  “Today’s announcement from the EPA regarding the partial removal and offsite storage of nuclear-contaminated materials is an important first – of what must be many – significant steps taken to protect the public,” Sen. Chappelle-Nadal said. She further called on a number of local, state and federal agencies “to ensure that the area workers, nearby residents and surrounding communities will be protected as they begin to excavate and relocate 45 years’ worth of ionizing nuclear-contaminated waste.”

For his part, Matthiessen thinks the EPA’s move represents a landmark accomplishment.  “Today really is a historical day,” said Matthiessen.  “We’ve been working on this for years with no activity.  And then finally over the last year, we finally made something happen.”

The West Lake Landfill in Bridgeton is a Superfund Site (land contaminated by hazardous waste identified as a candidate for cleanup because of its risk to human health or the environment). The area was originally farmland that became a limestone quarry in 1939, and in the 1950’s became a landfill.

Around 8,700 tons of leached barium sulfate was mixed with approximately 38,000 tons of soil and used to cover trash being dumped during daily operations at the site in 1973, according to the EPA.

Representative Matthiesen and Mr. Smith of the Missouri Coalition for the Environment both give high praise to the agency’s decision on the West Lake Landfill but are sharply divided over the direction of the EPA under the administration of President Trump.

Matthiesen considers Thursday’s announcement to be a refreshing move by Trump to rein in the EPA’s overreach under Democratic President Obama.  “The Trump administration wants to restore it to its original purpose, which is exactly what they’re doing right now, taking care of contaminated sites,” said Matthiesen.

Smith, who’s normally a harsh critic of President Trump’s handling of the EPA, says the administration made the right decision in this instance.  “I have to call it how I see it, and on this single issue (yes),” Smith said.  “There’s a significant amount of regulation rollbacks that are happening that I personally and my organization oppose.”

Thursday’s announcement is not the last decision that will be made pertaining to clean up at the landfill. The EPA said it plans to investigate radioactive groundwater contamination and will formulate a plan to handle the remainder of the radioactive contamination.

Smith said the Missouri Coalition for the Environment will continue to push for full removal of the waste and a buyout of the nearby families, who have watched their home values plummet and could face health issues.