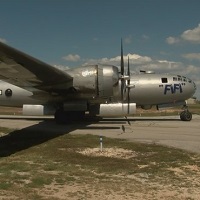 Former corporate pilot Alan Benzing, who has been flying the aircraft for five years, says the experience today is much different than during war times.

“Flying nicely maintained aircraft on beautiful days for 30 minutes isn’t quite the same as knowing you’re going on a 15-hour mission where somebody is really trying to bring your airplane down,” says Benzing.

FIFI was acquired in the 1970’s when a group of Commemorative Air Force members found the plane at the U.S. Navy proving ground at China Lake, California. It was intended for use as a missile target.

Benzing says he loves doing this job but when he gets to meet the men who actually flew these planes during the war that’s the most rewarding.

“We’re aware of the people in the missions and all but it isn’t until a vet comes out and sits down and I get the goosebumps on my arm come up,” Benzing says. “It really reinforces our love for doing this and for educating other people they did so much during the war.”

Also featured at the show will be a special T-17 aircraft used to train pilots before they moved onto the more difficult airplanes.

The CAF Air Power History Tour is in Branson Wednesday through Sunday and in Joplin next Monday through Wednesday.