The Missouri Supreme Court in Jefferson City is considering a death sentence appeal from Lance Shockley, who was convicted of killing a state trooper in 2005.  Arguments were made Tuesday before the high bench for a second time after the judges affirmed his conviction and sentence once before in 2013. 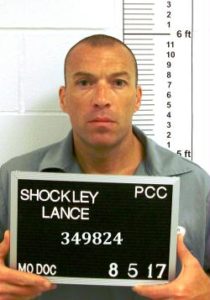 Shockley killed Missouri State Highway Patrol Sergeant Dewayne Graham on March 20, 2005. In 2009, a jury convicted him of first-degree murder and armed criminal action for the shooting. It also convicted him of leaving the scene of an accident in November 2004.

Sergeant Graham was outside his home near southeastern Missouri’s Van Buren when he was gunned down. Investigators said Shockley killed Graham because Graham was investigating Shockley for involuntary manslaughter and leaving the scene of a one-vehicle fatality crash in which the person who died was initially thought to have been the driver.

The jury that found Shockley guilty in 2009 failed to agree on a sentence, leaving the responsibility with the judge.  On May 22, 2009, Judge David Evans sentenced Shockley to death. After the Missouri Supreme Court upheld the decision four years later, Shockley had an execution date set for Jan. 31, 2014. But the state high court stayed the execution because of pending litigation.

Shockley had filed a post-conviction request in a lower court to have his judgment reversed and a new trial set.  He claimed his defense attorney was ineffective.

Judge Kelly Parker of southern Missouri’s Salem, who was appointed by the Missouri Supreme Court to hear the post-conviction appeal, denied Shockley’s claim and upheld his conviction and death sentence in June of 2017.

In the interim, the U.S. Supreme Court had declined to take the case in 2014 and 2016, and after the 2017 lower state court decision, Shockley once again appealed to the Missouri Supreme Court.

Those arguments were heard Tuesday, where Shockley’s defense focused on a juror it claimed had tainted the jury trial in 2009.  According to court documents, Juror58 told the judge during jury selection that he thought everyone would want to know his son was a Springfield, Missouri police officer and that he was a “published author”.

Shockley claims his trial attorney was ineffective because he failed to inquire about the contents of Juror58’s book, even though he did raise concern of possible bias because the juror’s son was an officer.  The trial attorney sought unsuccessfully to have the case tossed much later in the penalty phase of the case when he was given a copy of the book.

In the Supreme Court Tuesday, Shockley also claimed the trial court erred by not disqualifying Juror58 after he shared the book with his peers.  Juror58 had brought four copies that he distributed to other jurors and a deputy during the trial.

Shockley’s attorney, Bill Swift, opened up Tuesday’s proceedings by describing the front and back cover of the book as being covered in blood spatter and characterized themes on the back cover as being about vengeance, murder and a court system that’s unsympathetic to the plight of victims.

The book is described in court papers filed by Swift as sympathetic to its protagonist, a former Green Beret who assassinates a drunk driver who was freed after killing his wife.  Swift said the novel did irreparable harm to the case.

“His book is an indictment of the court system, and specifically how judges and courts handle criminal defendants, so it goes to the substance of what the jury is being required to decide,” argued Swift before the high court.

In court documents submitted by Swift, he said “Juror58 initially disavowed his book’s plot that the protagonist intended to make America pay for allowing murderers to go free. But when he was confronted with his book’s Amazon/Barnes and Noble web postings he authored that said exactly that, he had to admit the plot.”

Arguing for the state before the Supreme Court, Assistant Attorney General Dan McPherson defended the juror.  “If he was really so biased that he was trying to get on this jury to fulfill some kind of personal agenda, why would he even volunteer in the first place that he wrote a book,” said McPherson.  “He could have kept his mouth shut.  Nobody would ever have known about it.”

McPherson further state that Juror58’s book wasn’t a reflection of his views.  “He wrote these to make an entertaining story, not because he felt that way personally,” McPherson said.

Juror58 ended up being discharged from the trial later on during the penalty phase of the case.  According to court documents filed by Shockley attorney Swift, the judge informed Juror58 that his decision was based on matters associated with Juror58’s book, and informed Juror58 he could be “subject to subpoena at a later date regarding these matters.”

The death penalty case has now stretched out over 13 years and Shockley has aged from 28 to 41-years old.  He’s incarcerated at the Potosi Correctional Center in southeastern Missouri.

His appeal was one of four cases heard Tuesday by the Missouri Supreme Court.  The bench could hand down a decision at any time.