Five-hundred for Penske.  Five for Dixon. A 69th for Hamilton. 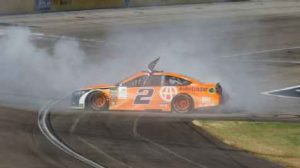 Brad Keselowski, driving Roger Penske’s Car number two, has won his third consecutive Cup race, the 500th victory for Penske Racing, which started fielding sports cars in 1966 and has posted wins in almost every kind of racing the organization has ever tried.

Keselowski’s win at Las Vegas in the first of the ten-race playoff series, automatically advances him to the next round.

A series of crashes forced the race to run an additional five laps.  Four crashes during the last two dozen laps brought out four yellow flags and a red flag that stopped the race for more than ten minutes, setting up two-lap shootout that saw Keselowski cross the finish line 1.3 seconds ahead of Kyle Larson. 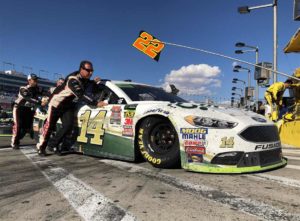 Missouri’s two drivers spent most of their day in the top ten but neither finished well.  Clint Bowyer, who made the playoff round of sixteen drivers, scraped the wall while running three-wide with Jimmie Johnson and Kurt Busch on a restart with eight laps left.  His crew made enough repairs for him to finish 23rd, two laps down.

Jamie McMurray was having another good run and even led for five laps before he lost his right rear tire and backed into the wall sixty laps from the end.  Chase Elliott could not avoid McMurray’s crashing car and was left with a car so badly damaged it could not continue either.

The championship contenders will be reduced to twelve after two more races.  Bowyer’s poor finish leaves him eleventh in the playoff standings.

NASCAR returns to short-track racing next weekend, moving on to Richmond.

(INDYCAR)—Scott Dixon finished first by finishing second on the road course at Sonoma, California in the last IndyCar race of the year.   Dixon ran second all day behind Ryan Hunter-Reay while his closest challenger for the championship tried all day to come back from a first lap incident that damaged his car and dropped him to last, a lap down. Rossi charged back, cutting his deficit from one minute to only eighteen seconds before he had to slow to stretch his fuel to the race’s end. 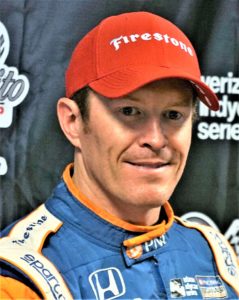 The championship is Dixon’s fifth. Only A. J. Foyt has more titles—seven. All of his titles have come in the sixteen years since he joined Chip Ganassi Racing.  He won the title in his first year with CGR, 2003, and added others in 2008, 20013 and 2015, before clinching his fifth at Sonoma.  He also won the Indianapolis 500 in 2008.

IndyCar won’t race again until hitting the streets of St. Petersburg, Florida to open its 2019 season on March 10, two weeks before its inaugural race at the Circuit of The Americas near Austin, Texas.

(FORMULA 1)—Lewis Hamilton felt the Singapore Grand Prix was “the longest race of my life,”  The Singapore race is considered the most demanding on the F1 circuit because of its heat and humidity.

Hamilton led from the pole and moved forty points ahead of Ferrari’s Sebastien Vettel, who blamed a poor qualifying run on his inability to move through the field to challenge Hamilton.

Hamilton now has 69 Grand Prix Victories, second only to Michael Schumacher.  The victory is his forty-fourth from the pole.

Formula 1 is off next weekend before the Russian Grand Prix on the 28.

Previous Post: « Puig continues to rake against the Cardinals. Wainwright looks to snap losing streak
Next Post: A Missouri based tactical rescue team still ready to assist with Florence »