(NASCAR)—Joplin native Jamie McMurray is reportedly out of a job as a driver for Chip Ganassi Racing after the season ends.  But Ganassi, who says he “loves Jamie McMurray” wants him to remain part of the organization.  The Associated Press reports Ganassi will offer McMurray a ride for the Daytona 500 next year but wants him to accept a leadership position in the Ganassi organization similar to one held by former Ganassi IndyCar driver Dario Franchitti,  who now is a driver coach for the Ganassi IndyCar team.   Franchitti retired as a driver after a 2013 crash left him with severe injuries and he was warned by doctors not to race again.

Neither McMurray nor Ganassi would comment on the AP report during events at the Brickyard 400 this weekend.  McMurray is 42, one of the oldest drivers in the Cup series.

McMurray set a NASCAR record as a substitute for injured Ganassi driver Sterling Marlin in 2002 when he won in only his second race in the Cup series.  He went on to be the series rookie of the year in 2003 and has recorded six more victories including the Daytona 500 and the Brickyard 400 for Ganassi in 2010. He is one of three drivers to win both races in the same year.

McMurray also co-drove the winning Ganassi car in the 2015 Daytona 24-hour endurance race, teaming with Scott Dixon, Tony Kanaan, and Kyle Larson—all of whom drove for Ganassi in IndyCar or NASCAR at the time.

McMurray made a spirited run in this weekend’s rain-delayed Brickyard 400, starting 20th and challenging then-leader Clint Bowyer for several laps.  Bowyer, a sometime Missouri resident, tied Kevin Harvick for most laps led in the 160-laps event, with 37, and was poised to re-take the lead on the lasgt restart. 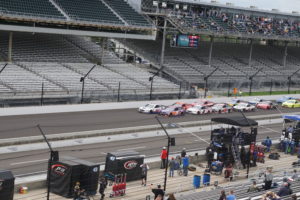 Bowyer was on the outside of the first row with Denny Hamlin on the pole. Brad Keselowski (in the 2-car) started third alongside McMurray, who was  behind Bowyer.  Erick Jones was behind Keselowski and Harvick was  behind Jones.  Bowyer and McMurray has gambled by not pitting during the last caution period to get new tires but Keselowski had made a quick stop and swept past Hamlin and Bowyer into the lead with three laps left.  Jones also got past them and finished nine-tenths of a second behind Keselowski with Hamlin third, Bowyer fourth and Harvick fifth. McMurray finished 7th. 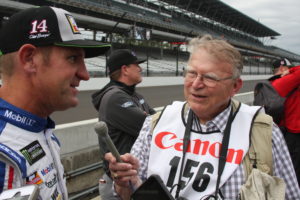 Afterwards, we asked Bowyer if there was any second-guessing about not taking new tires.

Bowyer will be the fifth-seed among the sixteen drivers that have qualified to run for the NASCAR championship in the next ten races.  McMurray is missing the playoffs after three consecutive seasons in them.