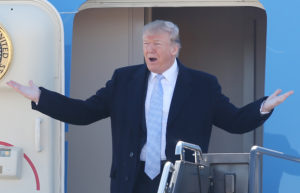 U.S. President Donald Trump motions to the crowds as he exits Air Force One upon his arrival at St. Louis-Lambert International Airport in St. Louis on March 14, 2018. Photo by Bill Greenblatt/UPI

U.S. Senator Claire McCaskill, D-Missouri, says she is “very uncomfortable” with a New York Times editorial criticizing President Donald Trump and describing him as unstable. During a press call today, she said the nameless writer, called a senior White House official, should step forward for the allegations to be taken seriously. McCaskill goes on to suggest that some Republican Senators are silent to voice similar concerns about Trump.

McCaskill said her Congressional colleagues should stand down on calls to impeach Trump until the Mueller investigation wraps up.

The writer said key administrative officials are secretly working against Trump and vowed to thwart the president’s “more misguided impulses until he is out of office.” The person claims that cabinet members considered using the 25th Amendment, which instructs how a president can be removed from office by the vice president and cabinet.

Trump calls the writer gutless and condemned the newspaper for publishing a piece by an anonymous person.