Outgoing Republican State Senator Bob Dixon of Springfield has had a successful beginning to a political career on a local level.  Having spent 8 years each in the House and Senate, Dixon has termed out of eligibility for continued service in Jefferson City. 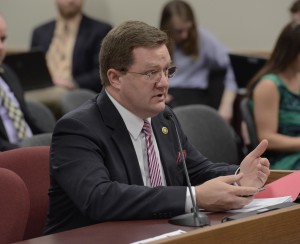 The one-time contender in the Missouri 2016 primary race for governor is now the Republican candidate for presiding commissioner of southwest Missouri’s Green County.  He handily defeated incumbent GOP Presiding Commissioner Bob Cirtin in the August primary.  Cirtin, who was facing accusations he misused county funds, lost by a more than 2-to-1 margin as Dixon accumulated 67.61% of the votes.

Under Cirtin’s direction, the county spent more than $260,000 on attorney’s fees to the Kansas City law firm Graves Garrett in response to a Missouri Ethics Commission investigation and a requested audit from the Missouri State Auditor following whistleblower complaints.

Dixon was highly critical of Cirtin’s actions during the primary and recently told KOLR-TV why he thought the moves were such a mistake.  “Clearly the county was—we know from the dollars—the county was strapped financially,” said Dixon.  “And the issue that was important to me was the integrity of the way it was done, which we spoke about extensively during the primary.”

Dixon told KOLR he would work to restore the trust of voters that he thinks Cirtin lost.  “I think if you level with voters and you tell them the truth, and you can maintain their trust and guard their trust, they will listen to those who are there to serve them,” Dixon said.  “When that trust is breached, not so much, and I think going forward that’s the most important thing that we can do.”

Despite losing badly to Dixon in a cloud of controversy, Cirtin is credited in some circles for achieving a career accomplishment with the passage of the half-cent sales tax.  The measure, which was approved by a nearly 60% margin, is projected to raise $28.6 million in 2019 and increase by 2% every year after.  The money is expected to be used to address problems such as an overcrowded county jail and a challenged criminal justice system.

Dixon indicated to KOLR that he would focus the county government’s attention on problems troubling families.  “The opioid crisis has affected, severely affected, countless families, countless people in our community and I think that is going to be at the top of anyone’s list,” Dixon said.  “You know, the other thing being family violence. There are initiatives already in place that are beginning to come together with regard to family justice and family violence, and I think those are the right ones. I hope to be able to continue to see those and also to propel those forward in a way that not only benefits people but heal situations and make us an even better community.”

The outgoing chairman of the Senate Judiciary Committee also suggested he could successfully represent the political right in an effort to improve healthcare. “Those are issues that directly affect the citizens, who they are,” said Dixon.  “If they’re done properly they are conservative issues; they are conservative principles in place which make us a better community, and I think we’ll be talking about those as the campaign unfolds.”