The Missouri State High School Activities Association (MSHSAA) says some football games across the state are being moved to Thursdays this fall because of fewer officiating crews. 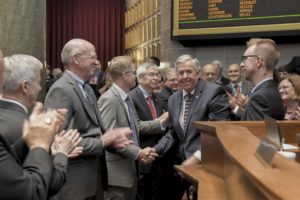 Missouri Governor Mike Parson shakes hands with state senators on June 11, 2018, before he addressed a joint session of the Legislature (file photo courtesy of Tim Bommel at House Communications)

State Rep. Jerome Barnes, D-Raytown, who served as a referee for about 26 years, says referees and sports officials are berated by fans.

Barnes tells Missourinet officials have been under attack.

“Verbal attack, physical attacks and the good officials are saying, hey, I don’t have to put up with this,” Barnes says.

His bill would add referees to the “special victim” classification, under state law.

Barnes’ proposal would include all levels of sports competition.

It also includes elderly residents and those with disabilities.

Barnes, who’s finishing his first term in the Missouri House, says the General Assembly shouldn’t wait until a sports official is brutally attacked or killed before taking action to protect them.

He notes a referee in Raytown was attacked in January, during a JV girls basketball game.

“Close to halftime, one of the fans did not like how the referee was calling the game and went out, come out of the stands, went down on the (basketball) floor and knocked the referee out,” says Barnes.

Representative Barnes says he’s scheduled to meet with Governor Parson’s office during the September veto session in Jefferson City, to discuss the bill and request the governor’s assistance with it.

As for MSHSAA, association communications director Jason West says some football games in the St. Louis region and throughout Missouri have been moved to Thursdays this fall, due to the lack of officials.

While West doesn’t know how many games are being moved to Thursdays because of a lack of officials, he also notes another factor in the decreasing number of officials is an increase in Missouri high school teams playing out-of-state opponents.

West tells Missourinet the number of registered officials for football has dropped from 1,488 to 1,480 this year.

He also notes MSHSAA is trying to recruit new officials.

The issue has come up in previous years at the Missouri Capitol, including in 2015, when testimony indicated soccer referees were especially needed.

Click here to listen to the full interview between Missourinet’s Brian Hauswirth and State Rep. Jerome Barnes, D-Raytown, which was recorded on August 28, 2018: