(Gateway Motorsports Park)—Will Power found himself in the enviable position of being able to run flat out while his opponents tried to save fuel and run the race on one fewer pit stop at this track just across the Mississippi River from the Gateway Arch. 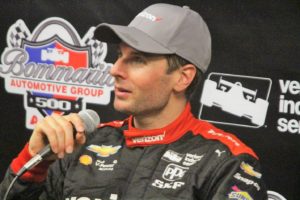 Power picked up his third win of the season, matching points leader Scott Dixon, who finished third, and Alexander Rossi, who finished  second. The finish tightens the point standings among the three Indianapolis 500 winners.  Dixon leads Rossi by 24 points and is up 68 on Power with two races to go in this season.  The final race, at Sonoma, is worth double points.

Qualifying was rained out on Friday, so Power started fourth—outside second row—because starting positions were based on points.  He didn’t take the lead for the first time until lap sixty but he knew he had a shot at victory early. “We had so much speed in hand, it was kind of fun. I’ve never passed so many cars. You just keep knocking people off one after another,” he said after the race. “The most fun way to go racing is when you can just go hard; you don’t have to think about lifting and being in a lean fuel slot,” he said. 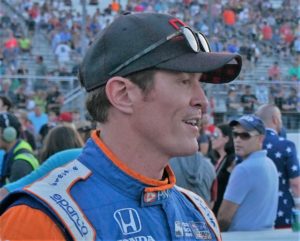 Dixon led more than half the race but gave up the position for the last time with seventeen laps to go as he tried to stretch his fuel but had to make a late-race stop.  Power was able to pull away to enough of a lead that he could make a two second splash-and-go fuel stop and keep the lead. Dixon admitted being “a bit mad at myself” for not deciding earlier to make the race a three-stop race, as Rossi did. “I’m not sure if it would have made a huge difference in the end, but it’s a solid result and we lost just a small bit to Rossi,” he said later.

Alexander Rossi, who won the 2016 Indianapolis 500 by getting the most from his fuel, and who did it again a month ago at Cleveland, tried to do it again at Gateway. He and his team managed to finish the race with one fewer pit stop than the drivers who finished in the top eight positions. 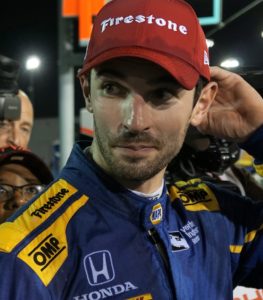 “It’s a mental game because you’re trying to obviously hit a fuel number to go X amount of laps and it was a very, very big fuel number,” he commented in the post-race news conference. “It was just enough at the end.”   A victory would have been preferable, said, but the main goal was to finish ahead of Dixon, which he did by about a second and a half.

Simon Pagenaud, the 2016 series champion, was fourth, only about 3.1 seconds behind Power.  Last year’s Gateway winner, Josef Newgarden, was seventh.

The race was the first for IndyCar since rookie Robert Wickens’ wicked crash at Texas last weekend. 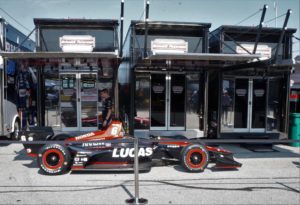 Schmidt-Peterson Motorsports had his backup car sitting with its hauler in the garage area. The cars in the race all had stickers bearing the number 6, the number on Wickens’ car.  Before the race, team owner Sam Schmidt said Wickens had started breathing on his own and had talked with his family  for the first time since the crash.  He’s had surgery on his spine and his legs.

Several drivers, including Pagenaud, wore special caps before and after the race to honor Wickens, who went into the race ranked third in points with seven top-five finishes including two seconds in his first IndyCar season. 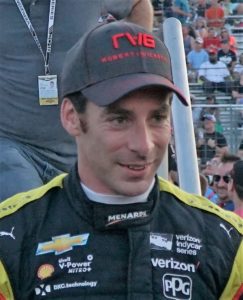 Wickens’ teammate, James Hinchcliffe, who suffered hand injuries last weekend when debris from Wickens’ crash went into his cockpit, drove with a broken finger at Gateway and finished fifteenth.

IndyCar races at Portland next weekend. 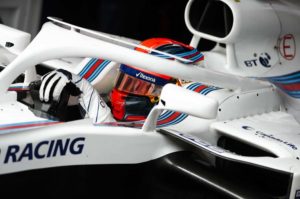 A horrendous crash on the first lap of the Grand Prix of Belgium might have been a fatal crash had Formula 1 not adopted the so-called “halo” cockpit protection design for this season.

Renault’s Nico Hulkenberg missed his braking point on the first turn and rear-ended Fernando Alonso’s McLaren, sending it flying over the Sauber of Charles Leclerc. 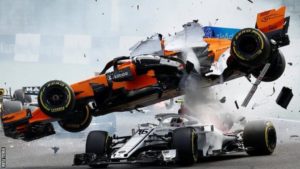 Leclerc’s halo was found with orange scrape marks from Alonso’s McLaren.  All three drivers were unhurt but the consensus is that the halo saved Leclerc’s life.

(IndyCar has tested a different kind of cockpit protection but has not put it in place on this year’s cars. IndyCar is opting for a clear windshield.)

Sebastien Vettel passed points-leader Lewis Hamilton just before the safety car came out after the crash and was in the lead at the end, Hamilton eleven seconds back.  The Vettel win cuts Hamilton’s points lead to seventeen.

F1’s next race is on the high-speed Monza circuit in Italy.

(NASCAR)—NASCAR has had its last week off before the end of the season, twelve races from now.  The show moves to Darlington next week, then to Indianapolis for the season’s 26th race, after sixteen drivers compete in the last ten races for the series championship.